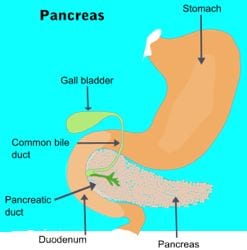 The pancreas is unique in that it is both an organ and an endocrine gland. It serves the function of producing enzymes that are essential for the breakdown of fat, protein and carbohydrates. In addition to this, your pancreas produces the hormones insulin, glucagon and somatostatin. Elevated insulin levels are primary concerns for diabetics and those with heart disease risk. Some research shows that the pancreas may also serve another important function.

In 1902, the Scottish Embryoligist John Beard proposed that proteolytic, pancreatic enzymes were the body’s primary defense against cancer. Within a few years, pancreatic enzyme cancer clinics popped up all over London. Not too long after this, Madame Curie proposed radiation therapy for cancer patients and Dr. Beard’s work was soon lost in the tomes of medical history. Dr. Beard’s pancreatic enzyme therapy for cancer was re-evaluated in the 1960’s by William Donald Kelley, a dentist who had used Beard’s protocol to cure himself of pancreatic cancer. Kelley went on to become known as “the father of Metabolic Typing”. He offered individualized nutritional therapies for patients, mostly who had cancer.

The pancreas is signalled by the hormone CCK (cholecystokinin) to produce pancreatic enzymes, which when released into the upper part of the small intestine called the duodenum, effectively break down protein, fat and carbohydrates.

To review some of the basic and important components of digestion: The pre-digestion of food takes place in the top portion of the stomach. Here, salivary enzymes and any food enzymes present will pre-digest food before acidification takes place. Somewhere between 30-60 minutes after food is consumed, the stomach’s parietal cells should produce hydrochloric acid. Production of this vital acid is often depressed amongst so many people.

The partially digested and acidified food makes its way into the duodenum as it is slowly released by the opening of the pyloric sphincter. Here, the duodenal cells release CCK, which then tells the pancreas how much pancreatic lipase (for fats), protease (for protein) and amylase (for carbohydrates) are necessary.

The pancreas must generate enough enzymes otherwise food will not properly be assimilated. This process is energy expensive. Many proponents of raw food nutrition believe that the pre-digestion that takes place in the stomach plays an important role in the prevention of an excess production of pancreatic enzymes. Studies conducted at the University of Illinois and Northwestern University indicate that as much as 45% of carbohydrates can be digested after the first 15 minutes after food has been ingested. This is prior to the production of hydrochloric acid by the parietal cells of the stomach.

Cholecystokinin (CCK) and secretin signal to the pancreas how many enzymes are required to digest the food coming through. Apparently, these hormones carry information to the pancreas regarding how much pre-digestion has taken place in the stomach.

Is the human digestive tract designed to digest and assimilate raw food? Its debatable. It is true that humans are the only species on earth that cooks its food.

Hormonal Functions of The Pancreas

Somatostatin will inhibit insulin and glucagon production. It also can inhibit the amount of pancreatic enzymes that get produced.

How Do I Know If I Have a Pancreatic Issue?

The Chapman Reflex points are a good way to gauge the dysfunction or an issue associated with an organ. The reflex point for the pancreas is located just below the sternum between the 7th and 8th rib on the right side. Pain or soreness in this area is a strong indicator of a pancreatic type of issue.

A fasting insulin level greater than 6 indicates excessive glucose in the blood and too high of insulin levels. The triglycerides to HDL ratio is another rough measurement for insulin activity.

While testing insulin levels directly is preferred, the Triglycerides to HDL ratio is an indirect measurement to assess insulin levels. This is because insulin production increases triglyceride production and decreases HDL levels.

Therefore a Triglyceride to HDL Ratio between 35-100 indicates high insulin levels are likely.

What is critical to understand is that triglycerides (blood fats) are more often elevated due to the excess consumption of carbohydrates and sugar than from excess dietary fat consumption. Artificially made trans fats (partially hydrogenated oils) are also responsible for significant elevations in triglycerides.

What To Do About It

First and foremost it is essential to eat in a way that is in harmony with your Metabolic Type©. This is important because of the fact that the pancreas is controlled by the autonomic nervous system. If a sympathetic dominant is eating a high protein type of a diet, this will only increase the over-active functions of this person’s sympathetic nervous system, placing a greater burden upon the pancreas. Conversely, a parasympathetic type has the greater ability to digest and assimilate larger quantities and types of dietary protein, relatively speaking.

I personally recommend taking plant-based digestive enzymes with meals containing cooked food, especially if meat or animal proteins are consumed cooked. Plant-based enzymes have a broader pH range and will work in the pre-digestive phase of the stomach. Remember you want adequate pre-digestion to take place. Make sure your stomach is producing adequate amounts of HCL, or supplementing with HCL if it is not. Hypochlorhydria (low HCL production) has become extremely common today. Taking animal-based pancreatic enzymes will also work to support inadequate levels of pancreatic enzymes.

Standard Process makes very good quality pancreatic enzymes. Some of their line contains products with whole pancreatic concentrate, instead of just the enzyme. I believe this is a very good idea.