Your Digestive Fire: The Vital Role of Stomach Acid 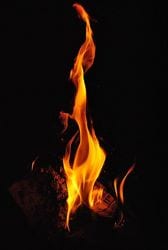 A healthy digestive system is largely defined by the health of your stomach. Hydrochloric acid (HCL) is the primary gastric acid secreted by your stomach. Its role in digestion and the regulation of pH in the stomach is critical for maintaining your health in a number of ways.

HCL: Roles in the Body

The primary role of hydrochloric acid is to sterilize the food you eat and to prevent harmful bacteria from entering the GI tract. HCL also triggers the release of enzymes such as pepsin which are essential for the digestion of protein.

Upon being released by the parietal cells of the stomach, HCL also triggers the release of alkaline bicarbonate into the blood. Its important to mention that HCL production is a major expenditure of biological energy. There are numerous minerals that appear to be hydrochloric acid-dependent, chiefly: magnesium, chromium, copper, iron, manganese, magnesium, molybdenum, selenium and zinc. Of these minerals, zinc and sodium are both are responsible for the production of HCL.

This means that deficiencies in HCL can and likely will result in the inability to utilize several vitally important minerals and nutrients!

Most Common Symptoms of HCL Deficiency

Runaway antacid use is a primary cause of HCL deficiency. This causes metabolic alkalosis, and the excess of bicarbonate in the stomach and blood, altering the ph balance. The bacteria helicobacter pylori (H-Pylori) is a bacteria that is present in approximately 50-90% of people. Most people who have H-Pylori have no symptoms of it! H-Pylori shuts down the production of HCL.

An important and interesting discovery made by Jonathon Wright, MD is that people who had the chicken pox virus, often have low HCL later in life. This may or may not be due to the chicken pox vaccine.

The Problems of Conventional Medicine

Another primary cause of HCL deficiency is PPI’s (proton pump inhibitors). The medical profession rolls out their GERD (gastro esophogeal reflux disease) protocol which consists of drugs that suppress HCL production, resulting in severe health issues including osteoporosis, bone loss, chronic alkalosis, mineral and nutrient deficiencies, and the list goes on.

Conventional medicine does nothing to identify the root causes of GERD and offers nothing whatsoever to address real solutions. In truth, wiping out HCL has dire consequences to human health and one’s body, leaving one susceptible to multiple bacterial and parasitic infections. PPI’s and H1/H2 blockers (which also wipe out HCL) have also shown in studies to cause severe mineral deficiencies and are strongly associated with the development of osteoporosis.

So many health issues can be due directly to gut function issues, HCL deficiency, chronic infections and enzyme deficiencies. Supplementing with HCL, pepsin and other enzymes is likely essential to restore normal gut function, but realize that it is more complex a lot of the time.

The most definitive test for HCL deficiency is the Heidelberg HCL test, although this machine is clunky and often hard to find. The easiest ways to assess digestive insufficiency and HCL deficiency is through observing Co2 and chloride levels on blood tests. Also, very effective is by looking at Hair Tissue Mineral Analysis. Jonathon Wright MD has identified that HTMA is as accurate as the Heidelberg test.

Even if HCL deficiency is present, it is equally if not more important to run tests for H-Pylori, parasites and other infections. If H-Pylori or other bacteria is present, this must be addressed first, otherwise the repair protocol is not going to work.

Also very important is testing the intestinal mucosal barrier for immunoglobulin status. If there is compromise to the intestinal mucosa, HCL therapy will actually result in further damage to the gut! Therefore, repairing the gut mucosa and killing any infections are essential first steps.

Once these preliminary factors are eradicated, then HCL and enzyme therapy can begin. In most cases, improving upon gut function can take up to 12 months to complete.

If there is damage to the gut mucosa, this is another can of worms to address. Not only will gut function be compromised, the adrenals will be called on to pump out more anti-inflammatory cortisol and and food sensitivity/allergy will increase in intensity. Both the adrenal and food sensitivities must be uprooted otherwise total healing is unlikely.