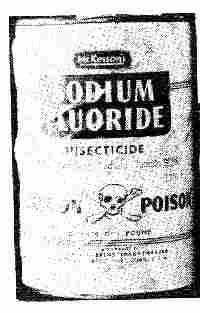 Water fluoridation is one of the most insidious acts of forced chemical inundation that has taken place in the history of civilization. The fluoride that is dumped into municipal water supplies is the result of industrial waste from the nuclear/uranium, phosphate, aluminum and metal industries.

Sodium fluoride is a drug that is being prescribed to the entire U.S. population without consent. Holistic dentist Lina Garcia states emphatically that the use of fluoride being safe, whether topical or through ingestion, is a “dangerous myth”. Fluoride has been shown to adversely affect the reproductive system. Animal studies have repeatedly found that high fluoride levels can damage sperm, reduce sperm count, and increase the rate of infertility in a number of different species.

According to Dr. Garcia, “Research on the impact of fluoride on human reproductive systems is limited, but some recent research, has indicated that fluoride exposure might be associated with alterations in reproductive hormones and reduced fertility. An ecological study of U.S. counties served by water systems with fluoride concentrations of at least 3 parts per million (ppm) found an association between increasing levels of fluoride and decreased fertility. (Freni 1994). (The EPA, which regulates the amount of contaminants that are allowed in public drinking water, allows up to 4ppm of fluoride in our drinking water.)

Two studies have compared testosterone levels in males drinking high-fluoride water (some of whom already exhibited skeletal fluorosis, a bone disease caused by the excessive consumption of fluoride) to males who lived in low-fluoride areas. (Susheela 1996, Chinoy 1998). The studies showed significantly lowered testosterone concentrations in the men who drank high- fluoride water, whether they suffered from skeletal fluorosis or not. The only men with normal testosterone levels were the ones who drank water with low fluoride concentrations.”

Water fluoridation, by way of the help from Sigmund Freud’s nephew, Edward Bernays, has allowed American industry to conveniently dispose of its waste products. Bernays in the 1940’s and 50’s was a key individual who taught industry leaders how to convince government agencies that fluoride should be added to municipal water supplies.

It is widely known that water fluoridation became popularized during the Manhattan project, when the U.S. military began mining uranium. Fluoride is used to enrich uranium and is an important component to the creation of the atomic bomb.

1940’s nuclear propaganda was directed at convincing municipalities who existed near nuclear plants that fluoride was not only good, but necessary!

Of all of the toxic substances found in the earth like mercury, aluminum and lead, fluoride is the most abundant. According to the Environmental Protection Agency (EPA), sodium fluoride is particularly the most toxic form of fluoride, in addition so is fluorosilicate acid and sodium silicofluoride.

Even though the EPA admits that sodium fluoride is toxic, damages and can destroy crops, plants, wildlife, livestock and even can put holes through rocks, the EPA maintains that fluoride is safe for human consumption. How’s that for science?

Fluoride industrial giant ALCOA funded Kettering Labs to back its need for scientific research regarding the ‘safety” of fluoride. “A book by Kettering scientist and Reynolds Metals consultant E.J. Largent, for example, written in part to “aid industry in lawsuits arising from fluoride damage,” became a basic international reference work.”

Most European nations refuse to add sodium fluoride to tap water. Germany: “Generally, in Germany fluoridation of drinking water is forbidden…The argumentation of the Federal Ministry of Health against a general permission of fluoridation of drinking water is the problematic nature of compulsory medication.” -Gerda Hankel-Khan, Embassy of Federal Republic of Germany, September 16, 1999