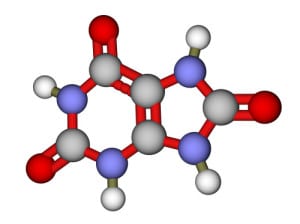 Much debate surrounds uric acid, gout, and other inflammatory diseases, which often feature high uric acid. These may include: heart disease, arthritis, kidney disease, diabetes, autoimmune conditions, and GI inflammation. When uric acid precipitates into tissues, this can lead to the aggravation of gouty arthritis.

Uric acid is the most abundant antioxidant in blood. In fact, uric acid accounts for approximately 50% of the antioxidant capacity of the blood. Uric acid is synthesized from purine metabolism, from the enzyme xanthine oxidase. Molybdenum, sulfur, iron and copper are the mineral cofactors in uric acid biosynthesis. Most clinicians recommend that people with gout, and those with high uric acid reduce or eliminate purine-containing foods. The primary sources of dietary purines are:

Purines are nucleic acid bases, the macromolecules of our DNA and RNA. Purines are synthesized as a result of folate and methionine methylation reactions. The human body synthesizes its own purines regardless of the consumption of purine-containing foods.

Elevations in uric acid, >5.0 mg/dl are reflective of rising levels of inflammatory activity and have little if anything to do with dietary purines. Uric acid can also rise in response to mycotoxicosis, and may also be elevated with GI inflammation.

75% of heart disease patients will present with elevations in uric acid. However, even if all fructose and purines are eliminated from the diet, uric acid may still remain elevated. As long as systemic inflammation exists, the body will synthesize more uric acid as a needed antioxidant defense.

Additionally, if there are aberrations or expressive genetic mutations  in the body’s methylation cycles (such as MTHFR, MTRR, SUOX, CBS), this can alter the rate of purine and uric acid biosynthesis. The pathway to purine biosynthesis is induced from 5, 10 methylene tetrahydrofolate. This folate metabolite is directly affected by multiple methylation reactions, involving many enzymes. Considering the high prevalence of methylation cycle dysfunction, one should always give attention to this factor when uric acid is elevated. Methylation dysfunction may be a core component of cardiovascular disease because of methylation’s role in homocysteine metabolism, glutathione formation and nitric oxide synthesis.

A common feature is a decrease in uric acid. This is often caused by a deficiency of an important mineral known as molybdenum. Molybdenum has 3 important roles:

Both elevations and decreases in uric acid are signals of oxidative stress. One should always give attention to the multitude of factors that influence uric acid synthesis.