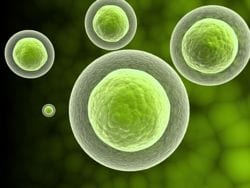 Inflammation is the body’s way of initiating healing responses. However, inflammation that is unregulated can result in excessive free radical activity and tissue destruction. Immune signaling is one of the primary mechanisms for initiating the inflammatory pathways. One of the most notable immune-signaling molecules are cytokines.

High levels of cytokine activity such as tumor necrosis factor alpha (TNF-a), has shown to damage insulin-signaling, and is implicated in the development of insulin resistance, type II diabetes and a wide variety of disease processes.

Cytokines trigger the phospholipase A2 inflammatory pathways, 5-LOX and 5-COX. TNF-a stimulates the stress response, by activation of the HPA axis. TNF-a also has shown to activate leukotriene production. Leukotriene’s are the virulent and pathological fatty acids which result in free radical activity and tissue destruction.

In my presentation on autoimmune conditions, I discussed the role of nutritional factors that have shown in studies to inhibit TNF-a, leukotriene activity and subsequent free radical activity.

Antioxidants are of pivotal significance for the prevention of harmful free radical activity. Antioxidants are either exogneously obtained from diet, or they are endogenously produced. An antioxidant is any molecule that can inhibit the oxidation of other molecules. Examples of antioxidants derived from diet are Vitamins E (tocopherols, tocotrienols), A, C, polyphenols, catechins, carotenoids, certain phytonutrients.

The most significant, endogenously-produced antioxidants are: Uric Acid, Glutathione, Alpha Lipoic Acid, Catalyse, Superoxide Disumtases, CoQ10. Many researchers would argue that Cholesterol is also an antioxidant, as cholesterol has been shown to inhibit pro-inflammatory fatty acids such as leukotriene.

In fact, cholesterol is powerfully anti-inflammatory and is of critical importance in order for the body to regulate inflammation and free radical activity. Low cholesterol values are associated with a number of degenerative conditions, including many types of inflammatory autoimmune conditions.

One of the primary markers of inflammation is hyperinsulinism. It has been demonstrated in medical literature for many years that hyperinsulinism is a primary factor associated with the development of cardiovascular disease. Increased levels of insulin are strongly associated with a diet high in sugars and carbohydrates.

Insulin has demonstrated in studies to increase TNF-a and the initiation of pro-inflammatory mediators.

Insulin is associated with increased levels of C-Reactive Protein (CRP). CRP is a protein synthesized by the liver and is a primary marker for inflammation. Studies have shown that trans fatty acid consumption (from sources such as fast foods) increases CRP levels by an average of 73%.

Regulation of Inflammation Through Nutritional Intervention

First and foremost one’s diet should be in harmony with one’s type of metabolism. As a nutritional consultant who has worked with many, many people, I have witnessed the effects that varying diets have on people’s health, for better and for worse. There are no ‘one size fits all’ dietary approaches.

I have witnessed how a diet high in purine-rich red meat can resolve hyperglycemia and diabetes type II. Conversely, I have watched how this exact diet can actually increase insulin resistance and hyperglycemia in someone else.

The answer to the question: “how can this be possible?” is best understood as the effect of biochemical individuality. When certain aspects of metabolism become de-regulated and imbalanced to such a degree, there becomes an increased demand for certain foods and nutrients. Foods that are non-harmonious to these de-regulated metabolic states, can actually feed the existing metabolic imbalance.

Take for example someone with diabetes type II, whose sympathetic nervous system is over-reactive, and as such is the ‘dominant imbalanced’ aspect of their metabolism. Consumption of purine-containing red meat will only further drive the sympathetic response, increasing glucose and likely cortisol. Someone with a ‘dominant sympathetic metabolic imbalance’ will thrive on a diet high in low starch vegetables and smaller amounts of very lean protein.

In an opposite situation, a type II diabetic with a dominant “parasympathetic metabolic imbalance” MUST consume purine-rich red meat frequently, in order create metabolic efficiency. For such an individual, consuming a diet that is high in vegetables and low in protein will not result in the resolution of hyperglycemia, and in fact may actually make matters worse!

It is important to point out that these are not opinions, these are observations I have made based upon close analysis.

Systemic, proteolytic enzymes such as bromelain, pancreatin and serrapeptase all possess potent anti-inflammatory effects. Studies have sufficiently demonstrated thatbromelain inhibits TNF-a as well as PG2 prostaglandin and the inflammatory thromboxanes.

Herbal botanicals such as boswellia, willow bark and curcumin all have been shown as potent inhibitors of inflammatory pathways.

Polyunsaturated fatty acids such as omega 3 possess an ability to inhibit PG2 prostaglandin synthesis, but have also shown to generate free radicals and loss of vitamin E. Use of omega 3 fatty acids are best titrated according to the needs of an individual.