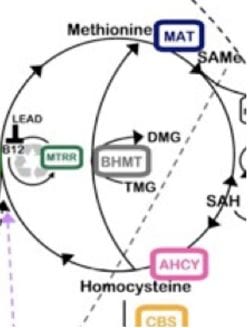 Elevated levels of homocysteine have been a known independent risk factor in cardiovascular disease, cancer and other degenerative diseases for several decades. Dr. Kilmer McCully’s groundbreaking research decades ago, has led to new understandings regarding the role genes play in homocysteine formation.

Certain inherited genetic mutations such as MTHFR, MTR, MTRR, BHMT and CBS may significantly increase your risk factors for vascular inflammation. The expression of each of these genes all play a significant role in homocysteine metabolism. Combinations in the expression of these gene mutations may pose more of a problem than single gene mutations, such as a single MTHFR mutation. Studies such as this, indicate that the combined effects of various genetic mutations suggests greater implications for vascular inflammation, than just a single gene mutation such as MTHFR.

Homocysteine is an amino acid substrate. It is a by-product of the amino acid methionine and is formed when methionine loses one of its methyl groups. Homocysteine is actually essential for the human body, and for proper methylation reactions in every cell. The main problem is that if the methylation cycles of the body are not working properly, the result of certain faulty genes and/or enzyme inefficiencies, homocysteine levels can elevate, causing inflammatory activity.

While implicated in vascular inflammation when elevated, homocysteine is actually essential in order to activate the transsulfuration pathway, via the CBS (cystathionine beta synthase) gene/enzyme. Without the participation of homocysteine, the body’s ability to synthesize the amino acid cysteine is compromised. Cysteine is needed to generate the powerful antioxidant Glutathione. Glutathione is required as one of the primary antioxidant defenses in every cell of the body. Glutathione protects against the raging internal fires of oxidative stress, toxins and free radical destruction. Additionally, homocysteine is needed for the generation of the amino acid taurine via transsulfuration. Taurine is well documented to possess powerful protection from cardiovascular disease and stroke.

For these reasons it is now being postulated by many researchers, that low levels of homocysteine can pose a serious problem!

The potential problem with elevated homocysteine is: whatever amount of homocysteine remains AFTER CBS activates transsulfuration, the remaining homocysteine must be re-converted back into the amino acid methionine. If it doesn’t make it back, homocysteine values may begin to rise in. This is where it has been most studied.

How Your Body Re-Converts Homocysteine Into Methionine

In order for the body to re-convert homocysteine into methionine, several key nutrients are required. Most notably, interactions with B-12 and folate are essential. These B-vitamins are so imperative for biochemical processes, without sufficient levels, andwithout the right forms of these nutrients, the body will fall to vascular diseases, children will be born with birth defects, and inflammatory, neurological diseases may ensue.

B-12 and folate both interact to bring homocysteine back to methionine using the “long route”.

Additionally, the body can use the methyl donor betaine, also known as TMG (trimethylglycine) to re-convert homocysteine into methionine. The Betaine/TMG pathway, fueled by the gene enzyme BHMT, converts homocysteine back to methionine in what is often referred to as the “back door” pathway, because it can bypass the long route of homocysteine via folate and B-12. In this backdoor pathway, the body also uses the methyl donating nutrient choline.

An enormous amount of research in recent years has evolved regarding the status of certain genes in the methylation pathways. This includes all of the major genes involved in the activity of homocysteine such as MTHFR, MTR, MTRR, CBS and AHCY. If your homocysteine levels are elevated, it may not be as simple as supplementing with B-12, folate or Betaine HCL. Nor may it be as simple as supplementing with NAC (n-acetyl cysteine). Although under the right circumstances, and given in their correct forms, these supplemental protocols may be effective at lowering homocysteine.

Certain gene mutations or blocks in their enzymes may prevent the body from generating usable forms of certain nutrients. This may especially be the case in MTR, MTHFR and MTRR mutations. MTRR mutations are considered “down-regulations”, slowing the methylation and re-cycling of B-12. If there is a combined MTR mutation present, this can further increase the demand for methylated B-12.

The complexity of gene mutations, and the combined effect of these mutations reveal the highly complex nature of human biochemistry. Additionally, a gene mutation may not automatically mean your body is going to suffer. Nonetheless, nutritional intervention that is patient-specific, one that takes into account the whole picture, has the potential of generating higher levels of health.

Association Is Not the Same As Causation

Although elevated homocysteine is associated with an increased risk of vascular inflammation, this is not the same as causation. Remember that homocysteine is a needed substrate. The body’s inability to effectively remove homocysteine and re-convert it back into methionine, or into transsulfuration metabolites, reflects metabolic and biochemical dysregulation. This dysregulation involves complex issues with gene and enzyme mutations, as well as quantitative and/or qualitative nutrient deficiencies.

As more genetic research emerges, it is clear that the issue of homocysteine toxicity is reflective of varying levels of metabolic complexities. If a person’s homocysteine levels are elevated, this is the tip of the iceberg, and not the cause of the problem.

In such cases, efforts should be made to address the levels of causation. These may include investigating genetic methylation mutations, investigating basic nutrient deficiencies, and inadequate diet, as well as monitoring the status of nutrients and nutrient substrates like homocysteine, B-12 and folate.