The Truth About Salt 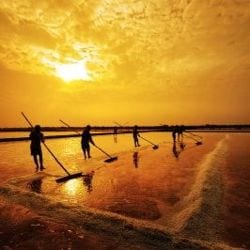 While your typical “table salt” is the most infamous salt perhaps in popular culture, there are many health benefits to the purer ancient forms of salt. It’s true that most commercially sold table salt can be extremely detrimental to your bodily functions.

Most forms of table salt contain dangerously harsh chemicals added by manufacturers for processing. Add to this fact that most table salt contains refined sugar and you can see why salt has received a poor review in the public’s eye.

The good news is there are many varieties of pure sea salt that are not only safe to use but easy to procure online or in grocery stores. Well known in the Himalayas as “white gold” Himalayan Crystal Sea Salt mirrors many of the natural elements and minerals found in the human body. Far different in its value and constitution than iodized salt, Himalayan sea salt has been known for centuries for it’s astounding health benefits and ability to restore several areas of health especially related to hormone production. These benefits include but are not restricted to reducing muscle cramps, increasing libido, promoting hydroelectric energy creation as well as for providing relief to Adrenal Fatigue.

Another great variety of sea salt that is known for its restorative health benefits is Celtic sea salt. This sea salt has been used both for its direct medicinal benefits as well as for food preparation since ancient times. Celtic sea salt is chemical free unlike the traditional table salt. It is also condensed with mineral rich trace elements that enhance your body’s many mineral and electrolyte-dependent functions.

Hawaiian Bamboo Jade Sea Salt contains certified organic bamboo leaf extracts, well documented in Southern China to be rich with extensive amounts of amino acids, vitamins and antioxidants. This sea salt too can be used for not only treating ailments such as chronic fatigue and muscle pain but also as a tasty accent to your favorite dishes.

Commercially sold table salt is often times mined from underground salt deposits then is heavily processed with chemicals containing no benefit to your body. Sea salt has extensive uses and provides a pure form of sodium, which is essential in regulating muscle contraction, nerve stimulation, and proper adrenal functioning.

Adrenal Fatigue is increasingly affecting the population at alarming rates. Causes of Adrenal Fatigue can result from high levels of improperly managed stress, which places demands upon  the body’s production of hormones, especially cortisol.

While not necessarily a stand alone treatment for such ailments as Adrenal Fatigue, sea salts in their purest forms have been shown to drastically help in the recovery of Adrenal Fatigue for countless sufferers over short amounts of time. Consider including sea salt into your diet and you’ll be providing your body with much needed minerals and natural healing properties which it requires for full restorative health.