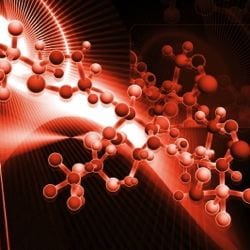 Hormones are cell messengers that carry important signals to different cells in the body. There can be a lot of things that go wrong in their communication, and these problems can be due to a multitude of factors, including: nutritional inadequacies, stress, toxicity, organ toxicity/malfunction, mineral deficiencies.

This article is going to investigate some of the basic steroidal hormones, the pathways they inhabit and problems that can interfere with their utilization. There are 5 classes of steroidal hormones: glucocorticoids, mineralcorticoids, androgens, estrogens and progestagens. The steroidal hormones have regulatory functions in major parts of the body, including: immune function, inflammatory processes, metabolic processes, fluid dynamics and sexual functions and characteristics.

ALL Steroidal Hormones Are Made From Cholesterol & LDL 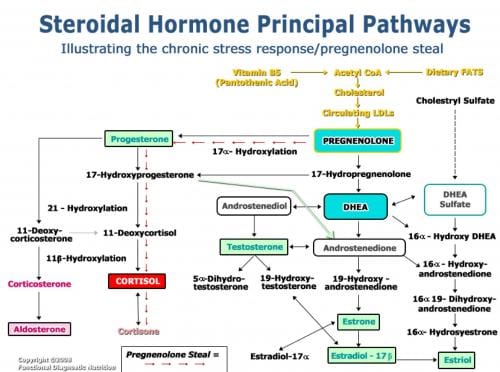 This is bad news because the body can only make DHEA from pregnenolone and if it is being “stolen” or used to make cortisol the body cannot make DHEA, Necessarily hormone production is going to suffer.

In some extreme examples, a tremendous amount of progesterone can be made, and a very small amount of that actually converts into cortisol. A person could have very low cortisol levels and very high testosterone and estrogen.

Estrogen dominance will also tend to cause copper toxicity. Progesterone will tend to reduce copper in the body. But in estrogen-dominant women, copper levels remain elevated, because progesterone is not available to counter copper’s effects. As copper and estrogen build, they will give way to many symptoms including PMS, irregular menstruation, fibroids, migraines, ovarian cysts, insomnia and many other symptoms.

Zinc is a critical mineral that balances copper. Zinc is closely related to testosterone in men and progesterone in women. Zinc is one mineral in particular that is deficient in many people’s diets. It is found abundantly in organ meats, red meat and in smaller amounts in pumpkin seeds. But there are not too many other places to get adequate zinc into your diet. On the flip side, there are many exogenous sources of estrogen, including xenoestrogens, which are found in chemicals, fertilizers, petroleum products. Xenoestrogens are abundant in the environment, and virtually all people are exposed to them in high amounts.

Environmental copper is also quite common Copper pipes will eventually erode and accumulate in water. Copper is also found in birth control devices, copper cookware, swimming pools, and in certain wood preservatives. Vegetarian diets tend to be high in copper and low in zinc, especially if soy and legumes are the primary protein sources being consumed.

Adrenal fatigue is a textbook alternative health diagnosis. It is characterized by exhaustion, fatigue, and generally excessively high or low cortisol levels. There can be many, many causes of adrenal fatigue. Adrenal fatigue can be thought of as one of a multitude of symptoms that arises when health falls apart. Adrenal fatigue is indeed an excellent opportunity to get your life back in order, and to become honest with the way one has been living their life.

Typically when there are high levels of cortisol, this is characterized as hyper adrenal activity. When low levels are present, this can be characterized as hypo adrenal function. One of the primary influencing factors with adrenal fatigue is inadequate electrolytes and poor hydration. Other primary factors that can interfere with normal cortisol production and adrenal function are heavy metal toxicity, poor diet and nutritional deficiencies. Low conversion from pregnenolone to progesterone can also augment cortisol production.

Most often, adrenal fatigue is not considered a real problem by medical diagnostics. This likely has to do with the fact that blood testing is not reflective of true adrenal hormone levels. Steroidal hormones such as cortisol are bound to proteins in the blood and therefore these levels do not necessarily reflect the actual bio-available levels of certain steroidal hormones. Many believe that the preferred method of testing adrenal hormone levels is in the saliva.

The ratio of certain electrolytes such as potassium and sodium have a lot to do with adrenal function. When these electrolytes are augmented, adrenal function is certainly going to be less than ideal. Since the balance between these two electrolytes is so critical for normal, cell membrane electro-conductivity, a variety of health-related issues may ensue beyond adrenal fatigue.

In the alternative world, many practitioners jump right into bio-identical hormones such as progesterone creams and DHEA supplements. While there can be a lot of benefit with this therapy, it should be noted that hormones are powerful substances. If bio-identicals are going to be used, their dosage should be closely monitored. In many instances, their use may not be necessary if other fundamental therapies are implemented. One may think of bio-identical hormones as “training wheels”, instead of permanent support.

Restoring viability to hormone pathways can be achieved through individualized diet, proper hydration and mineralization, enhancing basic detoxification, rest and exercise. Knowing how to use minerals such as sodium, magnesium, zinc and copper is tremendously important for helping regulate hormone rhythms.

The importance of getting to bed between 10PM-12AM can have huge beneficial effects for those with adrenal fatigue issues. If sleep is an issue, another hormone to investigate is melatonin. If melatonin levels are found to be abnormal, consider investigating gut function, as the majority of melatonin is made in the gut.