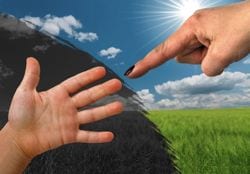 The sight of seeing a predictive outcome analysis for the development of a disease process from a genetic test has many people scared out of their socks. In many cases, some people have no interest in looking at the data at all. But of course, these individuals are still under the premise that their inherited gene sequence means certain diseases are inevitable. Nothing can be further from the truth.

Epigenetics demonstrates that gene expression is influenced heavily by lifestyle factors, such as diet, how well your body can adapt to stress and its environment, as well as how well your body can detoxify chemicals and toxic metals. Of course, if you have inherent genetic weaknesses, you consume a standard American diet and are filled with toxic mercury from dental amalgams, then the health outcome of the situation is headed down hill.

Even if you have mutated genes that alter the function of important biochemical pathways of your body, such as in methylation pathways, there are ways to bypass the issues. Gene-specific nutrient therapy, referred to as Nutrigenomics and a strong, individualized whole food diet, can prevent your genetic weaknesses from expressing certain diseases.

What’s more, is that the study of the epigenome demonstrates that changes in DNA and histones can be passed down from parent to child. And yet, the underlying genetic sequence remains unchanged. This means that a bad diet and exposure to lots of toxins will not only affect your health, but can affect the health of your children and even their future generations.

Your “Sins Of Health” Will Be Reflected In Your Children

Back in the 1930’s, when Weston A. Price photographed native people who had jumped off of their ancestral diet and had adopted westernized ways eating, he found that the children were the first generations to suffer sickness, bone and structural deformities and had a great susceptibility to diseases not previously seen in past generations. Why?

Epigenetics demonstrates that changes in gene expression due to the changes in the health of BOTH parents, impacts subsequent generations. Some research even suggests that inherited epigenetic changes may be due more to the father’s epigenetic expression than the mother’s. It is these reasons why so many current clinicians are emphasizing pre-natal health, and improving the health of parents, BOTH parents.

Personally, I believe pre-natal care should begin in the womb. And by “the womb” I am talking about when the parents themselves are in the womb. Preparation for pregnancy shouldn’t begin on the day before conception! It should begin years before, decades before, generations before. The concept of “you are what you eat” goes VERY deep. In fact, I would restate that phrase to say: “you are what you eat, and what you eat and how you consciously take care of your body is ultimately what your children will become, and what their children will become”.

But now we have situations where various diseases, many not previously seen, such as autism, have become epidemic literally within a 20-year period of time. That’s astounding, not to mention deeply disturbing and profoundly sad.

But it isn’t just about autism. That is only the tip of the iceberg. We’re talking about all types of diseases. These epigenetic changes have taken a long time to manifest. Its taken generations of junk diets, pesticide, chemical and toxic metal exposure, to procure the manifestation of neurological and inflammatory diseases. I’m not saying that other factor’s such as toxic vaccines aren’t involved – they most certainly are. And the neurotoxic chemicals and heavy metals in these vaccines undoubtedly are having impacts upon epigenome expression. However, there are many factors involved. Chemical changes in DNA and histones due to epigenetic influences passed down from past generations is a major factor, and certainly is leaving children extremely vulnerable to all types of environmental factors when they pop out of the womb; or even when they are still in the womb.

Epigenetic expression explains why some individuals are just so much more sensitive to environmental toxins than others. Epigenetic expression can explain why certain individuals are vastly more susceptible to developing cardiovascular diseases and autoimmune disease than someone else. Epigenetics may very well explain someday why some people that have Lyme disease are so highly symptomatic, and yet others who are carriers have no symptoms.

The Role Of Environmental Toxins On Gene Expression

What we have here is evidence that exposure to chemicals is capable of altering genetic expression, to not only our children, but to our children’s children, and their children too! Think about that the next time you decide to spray your weeds with Monsanto’s Roundup.

In fact, a recent study conducted on rats exposed lifelong to Monsanto’s Round-up and Monsanto’s GMO corn reveal absolutely horrifying results: all mice developed tumors, 50-70% died prematurely. This study was the most dramatic and definitive piece of evidence to show the massive genetic implications of chemicals and genetically modified foods.

Future generations of this earth have a lot to look forward to: the inherited toxicity of their ancestors now all dead, their inherited gene mutations and the effects of epigenetic changes to DNA and histones, and the exposure to future environmental toxicities.

You want to give your children something to look forward to? Its time to get serious about your health. If not for you, then for them. Those who continue to be ignorant of their own health, will not only be impacting themselves, but their offspring several generations down the line.