The 2 Most TOXIC Practices In Modern Dentistry 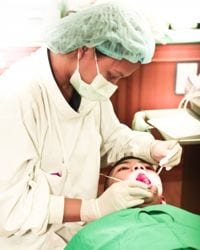 The practices of conventional dentistry can result in some of the most insidious sources of toxicity and can become a very real threat to the health of the human body. It is amazing to me that dental science is split in 2 directions: one direction is intent on keeping the profits rolling through the use of cheap, and toxic procedures, and the other direction actually attempts to spare the health of the individual by using safer, non-toxic methods.

It is the non-toxic school of dentistry, referred to as “holistic” or “biological dentistry” that takes so much political heat and backlash from the codgers of dental boards, and the stalwarts at the FDA as well as from dental conservatives.

The fact of the matter is that many modern, conventional dental practices are not modern at all, but rather archaic and toxic to the body.

50% of each dark, metallic filling is made from mercury. Next to radioactive isotopes, mercury is the most toxic substance on earth. How and why it is used as a dental material is baffling. Mercury-containing dental fillings date back to the pre-civil war era, and it is long overdo that they are banned by the regulatory agencies.

Instead, the state dental boards have colluded with the FDA, taking away dental licenses from dentists who chose to tell patients that there is mercury in amalgam dental fillings. This happened regularly throughout the 1990’s.

Mercury harms the body in numerous ways, including being a very potent neurotoxin. Mercury poisoning is seen among those with endocrine issues, especially thyroid and adrenal conditions and autoimmune diseases. Mercury toxicity symptoms also include various forms of neuropathy, renal dysfunction, sudden hair loss, and bouts of intense chronic fatigue.

Many people report sudden and intense symptoms following the improper removal of dental fillings, or if amalgam fillings crack or are swallowed. Even if in place in your teeth, there is still a continuous outgassing of vaporous mercury every time you chew and swallow.

If Replacing Your Fillings

If you decide to replace your amalgam fillings, I only recommend their removal gradually, done over a long period of time and only by highly skilled biological dentists. Significant amounts of toxic mercury will outgass as they are being removed. Having the proper removal protocols and nutritional support in place can mitigate the potentially dangerous effects of mercury out gassing.

Also, if you struggle with a health challenge or illness, removal of mercury should be done slowly and preferably after making some improvements with your health.

The type of bacteria generated by root canals and cavitations are some of the most insidious forms of bacteria known! According to leading biological dentist Hal Huggins, DDS: “The toxicity of the contents of the cavitation appears to be identical to the bacteria of root canals…Some of these toxins show anywhere from 100 to 1000 times the toxicity of botulism toxin on certain enzymes tested! The contents of a cavitation have always tested as highly toxic.”

Root canals and cavitations result in the formation and promulgation of anaerobic (without oxygen) bacteria. These bacteria are little harmful when exposed to an oxygenated environment, but become and produce volatile toxins when forced into an environment without oxygen. In root canals and cavitations, where the periodontal ligament is not removed, the ligament (which attaches the tooth to the bone) can decay and rot and can form very volatile toxins.

In a root canal, the deadened tooth is sealed off in a damp, dark, moist vault forcing aerobic bacteria to thrive in this anaerobic environment. As Dr. Huggins points out, it isn’t the bacteria that is really the biggest problem, it is the toxic chemicals that the bacteria produce. These volatile chemicals such as thioethers and putrescines are capable of shutting down essential enzyme reactions in the body, seeping into the bloodstream, saturating organs and glands and potentially causing a cascade of hormonal, autoimmune and neurological diseases.

Many biological dentists believe that all root canal teeth become toxic. Many toxic root canaled teeth can cause bone deterioration and infections in the jaw and even adjacent bones in the skull. The removal of the toxic tooth can result in the release of many volatile chemicals and bacteria. If you decide to have the tooth extracted, this can also become very problematic. I recommend working only with highly skilled biological dentists who are also skilled in nutritional intervention.