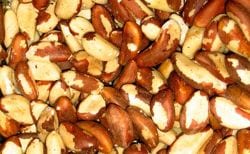 Selenium is an extraordinary trace mineral that has a tremendous amount of nutritive value inside of the body. Selenium deficiency has been identified in numerous diseases and serious health issues such as cancer, AIDS, heart disease and hypothyroidism. Selenium is also powerfully protective against toxic, heavy metals, especially mercury.

Selenium is a powerful antioxidant and free radical scavenger. It serves as a sulfhydrl agent and assists glutathione utilization. About 30% of selenium in the body is bound to glutathione peroxidase. Glutathione is the body’s most ubiquitous and concentrated endogenous antioxidant. Selenium also assists the antioxidant capabilities of Vitamin E, scavenging peroxides, and protecting cell membranes.

The brilliant chemist and physician Emanuel Revici, MD was one of the first doctors to effectively use selenium to treat cancer and AIDS. Revici used a special form of bi-valent selenium, which he bound with fatty acids and often administered intravenously. Revici’s use of selenium as a powerful anti-anaerobic agent pre-dated the mainstream’s acknowledgement of selenium  by 2 decades.

Selenium is of critical importance for thyroid function. Selenium is required for the liver’s conversion of T4 into the active T3. It is widely believed that people with hyperthyroidism have low selenium levels. Selenium supplementation has been shown to lower thyroid antibodies of people with thyroid cancer.

Selenium has a powerful affect on all aspects of immune system function, including cell mediated responses, lymphocyte sub classes as well as enhancing the function of neutrophils. Selenium has been demonstrated to improve kidney function by increasing GFR (glomerular filtration rate) as well as significantly improving the clearance of creatinine from the kidneys.

Selenium is ‘anti-anaerobic’, meaning that it protects from the potentially damaging effects of excessive anaerobic metabolism and the harmful effects of lactic acid. In this way, selenium promotes normal cellular oxidation. Revici determined that cancer always begins as ‘anaerobic’ at the tissue level. This is why he often injected selenium at the site of tumors.