Raw Dairy Is a Nutritional Powerhouse: Pasteurized Dairy Is Dead 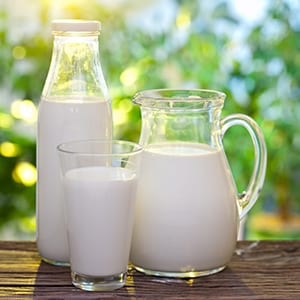 The Truth About Pasteurized Dairy

All dairy that has been pasteurized has been significantly damaged through heating and processing. In my experience, many people who are intolerant to lactose, are actually intolerant to pasteurized dairy. This is due to the fact that pasteurizing dairy destroys all of the enzyme activity in the food, including lactase, which is the enzyme that digests lactose.

According to Lee Dexter, microbiologist and owner of White Egret Goat Farms in Austin, Texas, the process of ultra pasteurization is extremely harmful to the fragile milk molecules. Pasteurization flattens milk molecules, preventing enzymes from doing their job. If these free enzymes cannot perform their biological functions of ‘fitting in’, once ingested these proteins from pasteurized dairy can pass into the bloodstream causing a condition commonly called ‘leaky gut’. As a result of this process, the body can mount an immune attack on these free, foreign proteins.

The process of ultra-pasteurization occurs when raw milk is heated between 176-194F. The milk is then steamed, or infused with steaming water. It is then cooled in a vacuum chamber and then the pasteurized dairy is separated from the water. According to leading Australian scientists, ultra-pasteurization results in whey protein denaturalization, sulphydryl compound formation and the formation of insoluble substances. In addition, the ultra-pasteurization process may result in strange cabbage like flavors. It is suspected that these flavors are altered through an unknown chemical process that you are not told about because it may be considered ‘industry standard’.

According to Raw Dairy Expert Mark McAfee, who is the owner of Raw Dairy California-based Organic Pastures:

“Pasteurized milk causes asthma, and as a result doctors prescribe a diet without pasteurized dairy products. Milk triggers asthma by destabilizing MAST cells, which release histamines that cause inflammation, mucus production and bronchial spasm. Pasteurized milk is a partial food product that is missing digestive enzymes and nearly all of its beneficial bacteria. Pasteurized milk (with rare exceptions) comes from cows fed a ration based on corn and soy rather than pasture and forage. Pasteurization warps and distorts fragile proteins, making them allergenic. Raw milk is the opposite and heals and prevents asthma by stabilizing MAST cells and reducing inflammation as shown by dramatic lowering of C-reactive protein levels. Raw milk rebuilds immunity by allowing the safe consumption of biodiversity in our diets. These bacteria then re-colonize the gut and become our immune protective and digestive ecosystem armies.”

What is Destroyed in Milk Pasteurization?

Raw dairy can be a vital component for a nutritional protocol for the healing of gut and mucosal barrier dysfunctions.

Where to Obtain Raw Dairy?

Raw dairy products are increasingly easier to find these days. This still does not stop criminal outfits such as the FDA from shutting down private raw dairy farms, such as the recent Rawsome food raid in Venice, CA. The FDA has acted out of its jurisdiction in many instances. Some states such as California and Washington allow the sale of raw dairy in grocery stores.