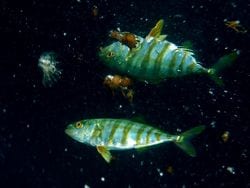 Despite the continuous emission of radiation being released from the Fukushima power plant in Japan, The U.S. is still continuing to import fish, seafood, vegetables and other foods from Japan, from the regions that are most exposed to radiation!

Although conflicting reports are saying that the U.S. government is monitoring radiation levels in fish, reports are not clear as to which fish are being imported. We know that yellowtail and puffer fish are two. The FDA’s website says it will monitor fish for inspection but will not be putting fish and seafood on “Alert” status. This is a government agency that raids amish farms with guns and is bedfellows with numerous pharmaceutical, genetic engineering and agricultural institutions.

The FDA admits that it does not have a safe level for radioactive iodine 131, only a level that would initiate ‘protective measures’.

All milk products, vegetables and fruits from 4 Japanese prefectures of Fukushima, Ibaraki, Tochigi and Gunma are being stopped and tested for possible contamination.

How much radioactivity is safe for consumption? Why doesn’t the U.S. government halt all imports from these 4 regions of Japan? Why take the risk? All it takes is one error in the detection process to potentially harm and injure people. Needless to say, I won’t be consuming Japan-imported sushi for a while.