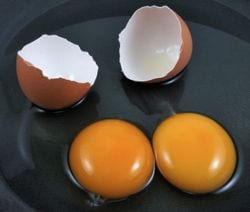 I remember first hearing about the benefits of consuming high amounts of phospholipid-rich foods when two colleagues of mine reported that eating 6-12 raw eggs daily resulted in significant health improvement in people suffering from multiple sclerosis and Crohn’s Disease. My interest in phospholipid-rich foods was piqued, because both of these conditions are autoimmune in nature, and as such result in high amounts of tissue destruction and inflammation.

Some of the most common phospholipids are the choline-phosphatides such as sphingomyelin and phosphatidylcholine.