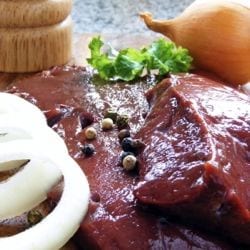 “You’re telling me I should eat more liver? Gross!” Such is the response from so many people today living in modern society. Long before the industrial revolution of food brought twinkees, processed junk foods, hydrogenated oils, margarine and factory farmed meat, the cuisine among cultures around the world included organ meats as a primary staple to the human diet. These once cherished and nutrient-dense foods nourished cultures for thousands of years. Nowadays, the powerfully nutrient-dense qualities of organ meats is all but forgotten. Many research and researchers would go as far as to say that the radical departure from consumption of nutrient dense foods is a primary factor for the development of degenerative diseases in modern, industrialized societies.

Furthermore, research into epigenetics may corroborate this and even lead to the hypothesis that the departure from nutrient dense foods has resulted in genetic damage through generations of nutritional deficiencies.

Organ meats such as liver, heart and kidney contain the highest concentrations of several nutrients.

How Prized Were Organ Meats To Traditional Cultures?

All that is needed is to read the ingredients of cultural cuisines from around the world and you will learn what foods have been staple to the human diet since time immemorial. Read the remarkable anthropological research conducted by Weston A. Price and learn about what foods indigenous cultures used to nourish healthy generation after generation.

Excerpt from Weston A. Price’s 1939 classic: “Nutrition and Physical Degeneration”:
“For the Indians living inside the Rocky Mountain Range in the far North of Canada, the successful nutrition for nine months of the year was largely limited to wild game, chiefly moose and caribou. During the summer months the Indians were able to use growing plants. During the winter some use was made of bark and buds of trees. I found the Indians putting great emphasis upon the eating of the organs of the animals, including the wall of parts of the digestive tract. Much of the muscle meat of the animals was fed to the dogs. It is important that skeletons are rarely found where large game animals have been slaughtered by the Indians of the North. The skeletal remains are found as piles of finely broken bone chips or splinters that have been cracked up to obtain as much as possible of the marrow and nutritive qualities of the bones. These Indians obtain their fat-soluble vitamins and also most of their minerals from the organs of the animals. An important part of the nutrition of the children consisted in various preparations of bone marrow, both as a substitute for milk and as a special dietary ration”.

The robust health of the native cultures that Dr. Price studied many years ago is in direct contrast with the health of humans today in modern civilization. Non-existent to these cultures was degenerative disease. In contrast to so many people today, native diets produced people with healthy bone, dental and facial structures. Their appreciation for the sacredness of the land and the sacredness of the nutrition provided by their animals was much, much deeper than is held by modern civilizations today. For many of these indigenous people, food was even more than medicine, it was like their sacred religion. Native people would consume the entire animal – everything: hearts, brains, liver, kidneys, intestines, pancreas, bone and bone marrow, fat and connective tissue. Nothing would remain of the animal, no waste.

Most animals today are wasted. They are born and raised exclusively for their skeletal muscle. The most nourishing part of the animal: organs, bones and glands are wasted. They are wasted in favor of that Saturday night sirloin steak marinated in corn syrup-drenched barbecue sauce. Slow-cooked nutrient-dense organic liver is bypassed for that char broiled, over-cooked, pork loin drenched in beer, or deep fried in the ultra pathological partially hydrogenated vegetable oils.

It is quite obvious that so few people today have appreciation for the nourishment provided by animals, a complete 180 degree turn from how native people viewed and respected their food, animals and their health.

With the industrial food revoultion brought food processing and mass marketing. The decline of organ meat consumption is a cultural void that reflects the shallowness of modern cuisines in favor of inferior alternatives.

Even if one were in favor of consuming organ meats, being able to obtain them from butchers and grocery stores in today’s modern culture is often like finding a needle in a haystack. Occasionally you can find liver, almost always frozen. Rarely will you find other organ meats such as kidney, pancreas or brain. If you do in fact have a source for these foods, you are in a very small minority.

If you are able to find other organ meats, the cost is often so low, due to such a low demand: very sad.

We Have Reduced The Power Of Food To Taste & Cost

Most people don’t appreciate or even realize that the food and nutrients that they put into their bodies are the primary biochemical fuel sources for all of the cells of the human body. The body makes energy from food. How many people choose their biochemical fuel based upon a food’s nutritional value? Very few.

Why do people think that organ meats have such intense taste and flavor? Because they have been deprived of these foods their entire lives.

If people were “nutrition first” eaters, the consumption of organ meats would be top on the list. Even without the advancements of vitamin and nutrient identification, native cultures knew that organ meats were the most vital forms of nourishment for the attainment of optimal health, generation after generation.

It is important to point out that what constitutes a vitamin is highly debatable. There are many known substances in foods that have very apparent nutritional value, however are not classified as vitamins by regulatory agencies such as the FDA. As an example, Vitamins such as E are known to contain far more factors than the industry label for Vitamin E: D-alpha tocopherol. It is now understood that vitamin E is part of a larger phospholipid complex, which extends far beyond D-alpha tocopherol.

Furthermore, the author of this blog posting does not take the RDA (recommended daily allowance) to be a serious or legitimate gauge for nutritional intake. However, the author has included the RDA as a means for baseline comparative investigation.

Organic Liver is one of the Richest Sources of (USDA %, 68 grams):

Liver is loaded with minerals and B-vitamins. I find it interesting that many MD’s, dietitians and most conventional nutritionists recommend pregnant or expectant women take a multi-vitamin containing synthetic, coal tar-derived vitamins, with special emphasis on folate. One serving of liver packs a very high amount of folate (RDA 43%) and extraordinarily high amounts of other essential nutrients, in a whole food form. Organic liver is one of nature’s most powerful multivitamins.

Pancreas was considered a very important organ meat for many cultures. Many alternative cancer therapies involve the ingestion of high doses of pancreatic enzymes. Would the ingestion of raw pancreas tissue facilitate this same benefit?

No ‘One Size Fits All’ Dietary Approaches

I do not advocate ‘one size fits all’ dietary approaches. I recognize biological individuality to be a fundamental factor in all people. Therefore, it is always advisable to understand that how one food behaves in one person’s biochemistry, may not behave the same way in someone else’s body.

It is important to address that not all people will derive benefit from organ meats, as the high purine content may deleteriously affect some individual biochemistries, due to specific metabolic imbalances and factors inherent in these people.

However, it is my belief that individuals who have an increased need for the nutrition found in organ meats may derive benefit by consuming them.