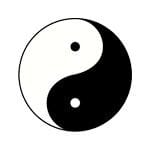 The concept of dualism appears with all manifestation in nature and in the universe. Dualistic forces are continuously existing in opposition, and yet through this opposition, wholeness is created. Take for example the two sexes: male and female. The human species could not exist if either men or women were the only sex. Together, despite being in many ways opposite, the wholeness of life is created. This is one of many concepts of dualism that exists in nature.

In Taoism and Traditional Chinese Medicine and philosophy, the concept of duality is expressed as yin and yang. Yin and yang are “complimentary opposites that interact with a greater whole, as part of a dynamic system.” The ancients recognized that yin and yang are actual forces which govern everything, including the functions inside of the human body.

From a modern, science-oriented understanding, this is precisely the case. In fact, your metabolic systems function through the concepts of dualism. Yin is considered the more cool, feminine element, whereas Yang is considered more of the masculine and warm element.

You have billions of biochemical reactions that take place inside of your body. These reactions fall under the control of a number of systems, sometimes referred to as Fundamental Homeostatic Controls, or FHC’s for short. These FHC’s are what regulate and dispense biological energy. Let’s look at 2 of these FHC’s and their relation to the yin/yang concepts. Both of these metabolic systems are what make up your Metabolic Type.

It is neither desirable to be too sympathetic (yang) nor too parasympathetic (yin). Both will result in imbalances. There must be a dynamic balance in order for equilibrium to exist. Sympathetic dominance can result in hypertension, hyperglycemia and diabetes, high amounts of stress, cardiovascular disease, and numerous other symptoms. Parasympathetic dominance can result in: low blood pressure, low blood sugar, electrolyte loss or insufficiency, arrhythmia, physical weakness and chronic fatigue.

It should be understood that the autonomic nervous system is like the control tower of your metabolism, immensely influencing other metabolic systems.

This control is specific to the uptake of nutrients by your cells and the rapidity of energy production from certain nutrients within your cells. Through several complex biochemical processes, your cells make energy in the form of ATP (adenosine tri-phosphate). How efficiently energy is produced in the cells depends upon the dominance of your particular oxidative metabolic process and whether or not you are consuming the correct fuel mixture. Certain individuals are overly reliant on the burning of carbohydrates to make energy (‘Glucogenic’ fast oxidizers: yang) and others are overly reliant on fats to make energy (‘Ketogenic’ slow oxidizers: yin).

Striking the Balance: Recognizing Your Own Biochemical Individuality

It is inconsistent with the laws of nature to believe that one way of eating is correct for everyone, or that foods and nutrients behave the same way in each person’s body. Once one begins seeing in clinical practice, these concepts of biochemical individuality in action over and over again, it becomes apparent that these aren’t concepts but rather inherent truths regarding life on this planet.

Despite the reality of dualism in nature, and specifically the truth of biochemical individuality, the human mind and ego may attempt to assert its beliefs as reality. This is the reason why there are infinite conflicting views about what diet humans should eat. The ego wants to assert that it is one way, and only one way, when in truth, there is only the right way for each individual.

Understanding this fundamental truth eclipses the limited rationale of the egoic self, and opens the door to a world of infinite possibilities. One is no longer bound to ideology, concepts or dogmatic beliefs, but rather lives from the truth of one’s own self: the reality of biochemical individuality.

If a person chose their food from the basis of metabolic individuality, and through the intuitiveness of their body’s nutritional instinct, I believe that the incidence of disease and human suffering would be significantly less on this planet.