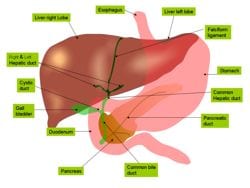 pYour liver is an amazing organ. It produces more than 500 vital functions. It is a massive organ responsible for so many biological processes and functions that I’ve been intimidated to write about it. All hail the mighty liver! Your liver filters and detoxifies your blood, stores glycogen, stores several years worth of nutrients, produces blood coagulation factors like fibrinogen, synthesizes glutathione, decomposes red blood cells, produces hormones, synthesizes cholesterol, produces bile to digest fats and synthesizes amino acids and degrades proteins. Holy smoke!! Am I missing anything? Probably.

Its easy to see that if something goes wrong with its functions, there can be any number of problems.

While known primarily for its detoxification capacities, your liver actually serves several powerful functions. Being the primary organ of detoxification, the liver filters all of your blood continuously. Your liver’s detoxification pathways are known as Phase I and Phase II, respectively. These 2 phases of detoxification involve several processes. Phase I involves the cytochrome P450 enzymes.

Your liver stores and releases glycogen. Glycogen is the long term storage form of energy that gets put away into the tissues. The amount of glycogen stored depends on intermittent fasting and the basal metabolic rate. Therefore, eating frequently between meals works against normal glycogen storage and release.

The liver also produces clotting factors such as fibrinogen and thrombocytes. These clotting factors prevent us from bleeding to death, and are also involved strongly in internal blood clotting. Heavy, excess amounts of fibrinogen for example can increase blood viscosity and reduce flow.

Cholesterol is synthesized in the liver, and from it, hormones are made. Your liver also sends out LDL particles which carry cholesterol to the tissues so that cholesterol can perform all of its vital functions. HDL transports cholesterol back to the liver so that it can be re-used or broken down. Calling LDL ‘bad’ and HDL ‘good’ is terribly misleading and incorrect.

There are basically 6 types of steroid hormones: mineralcorticoids, glucocorticoids, androgens, estrogens, progestagens and Vitamin D. The three steroidal hormones that are produced by the adrenals are:

It is the family of 50 powerful enzymes known as Cytochrome P450 that is responsible for converting cholesterol into the ‘master’ steroid hormone, pregnenolone. I choose to call pregnenolone a ‘master hormone’ because it is converted into numerous other vital hormones.

Without cholesterol which in synthesized in the liver, pregnenolone cannot be made. Drugs that inhibit the liver’s production of cholesterol may have a very damaging effect upon the cascade of hormones of the endocrine system.

Consider the vitally important functions of the 6 steroidal hormones, all of which are derived from cholesterol:

Bile’s primary purpose is for the digestion and emulsification of fats. Bile also is necessary for the assimilation of fat soluble vitamins A, D, E and K. These vitamins are of massive importance to the human body in numerous ways.

In addition to this, bile also contains bilirubin, the waste product of hemoglobin, which is broken down in the liver. Bile will also neutralize food after it has been acidified by the stomach’s acid. Like hydrochloric acid, bile will sterilize food as it passes into the small intestine.

Without adequate bile, most fats are not properly digested, and will be excreted through the feces.

With the liver’s production of urea, amino acids can be synthesized. Numerous amino acids assist the liver in a number of ways. Citrulline detoxifies ammonia. Methionine is a sulphur rich amino acid which is heavily involved in phase II methylation. L-Arginine assists lipid metabolism. Serine helps to store glycogen.

Currently there are a number of testing methods which can identify liver function. Please email me to learn more.