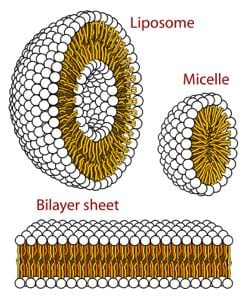 You may have noticed that over the years there have been many products promoting health. Consider that many of the most recommended and studied nutrients and nutritional supplements have something in common: lipids.The effect that lipids and lipidic compounds have in the body is not something to take lightly. Many would argue that lipids and lipid balance in the body are some of the most essential components to the health of the entire organism.

All may be classified as lipids or lipidic compounds: Vitamin D, Vitamin E, omega 3, 6 and 9, Vitamin A, Vitamin K, phosphatidyl nutrients, cholesterol, steroidal hormones (all derived from the cholesterol lipid). The lipidic nutrients that I just mentioned only constitute a small fraction of the entire spectrum of biological lipids.

The primary intent of Dr. Barry Sear’s Zone Diet is to correct eicasanoid lipid imbalances, as a means to getting the inflammatory response under control. It has been established in medical literature for many years now, that unbridled oxidative stress and free radical activity is at the origin of most disease processes. The free radical toxicity that ensues from oxidative stress are derived from the oxidation of immune-derived lipids.

Its significant to address that all biological cellular membranes are comprised of lipids. The balance of lipids (mostly phospholipids and cholesterol) within the membranes of cells account for the membrane’s integrity and fluidity. Simply stated, a cell membrane whose lipidic composition is compromised, is a cell whose functions are compromised.

Though the cytosplasm of human cells is mostly water, there are concentrations of lipids that make up its composition. The inner mitochondrial membrane is comprised of lipids, such as cardiolipin and cholesterol. Within that inner mitochondrial membrane is the electron transport chain, while the mitocohondrion itself functions as the energy-generating factories of the organism.

A cancer researcher Thomas Seyfried, PhD presents a compelling argument in his recent book “Cancer As A Metabolic Disease”, that abnormal inner mitochondrial lipids such as cardiolipin are at the root of damaged oxidative phosphorylation in cancer cell mitochondria. According to Professor Seyfried, this metabolic aberration may be one of the key components in cancer formation.

Emanuel Revici, MD, a physician and scientist, whose 77 years of clinical research would satisfy the appetite of any hardcore chemist, made a chain of significant discoveries regarding lipids, and their effects in human health and disease. Many of these discoveries would pre-date medical acceptance by as much as 50 years. Among his many discoveries, Revici was perhaps the first person to recognize the effects of radiation exposure on the human body. His research into the effects of radiation upon biological lipids led to his discovery of “trienic conjugated fatty acids”, which later became known as Leukotrienes, a name attributed by biochemist Bengt Samuelsson, who won the nobel prize in 1982, for what Revici had discovered (leuokotrienes = trienic conjugated fatty acids) decades earlier.

In terms of its effects upon lipids, radiation causes the formation of abnormal and highly pathological fatty acids.

“Its [radiations’s] ability to cause a conjugation of fatty acids represents the serious obstacle to its use. In view of this, the effect of radiation upon lipids actually can be considered as an undesirable epiphenomenon whenever the purpose of the therapy is to achieve a local effect at the lower levels….Furthermore, as we have noted above, the conjugating effect of radiation upon fatty acids is almost entirely limited to the production of trienes and dienes. The biological effects of such conjugated fatty acids are more apparent at the tissue level and above it…..”

The effects that radiation has on lipids has as much (if not more) relevance today as in previous generations. With the increased radiation from medical technologies, to the leaks of various nuclear-powered plants, radiation exposure may have ongoing and persistent damaging effects on biological lipids.

Revici would go on to discover the effects of various lipidic compounds in the human body, including those that were able to counter the effects of radiation. He would formulate more than 100 lipidic-based medicines in his medical practice. One of the more famous lipids Revici formulated and used was N-Butanol, a fatty alcohol, whose “anabolic” effects could be used in numerous applications. In fact, N-Butnaol was patented as a “hemostypticum”, a substance that is powerfully antihemorrhagic.

Among his more than 100 lipid medicines, he used various alcohols, amines, fatty acids, sterols, glycerols and phospholipids, many of which were bound to certain minerals, as a means to arresting the lipidic imbalances that he believed were at the core of various pathologies such as cancer, AIDS, autoimmune disease and cardiovascular inflammation. As medical research began to catch up with Revici, his theories and the implications of his discoveries begin to look rather groundbreaking.

Modern medical technologies has inadvertantly used many of Revici’s methods to deliver drugs and nutrients. For example, the idea of liposomes as carrier transports of pharmaceuticals and nutrients, is one such example. Liposomes are artificially-created lipids, which allow a more efficacious delivery of a nutrient or drug. Liposomal vitamin C and liposomal glutathione are two examples of liposomal-bound nutrients. The ability to create or use an existing lipid bound to a nutrient, is a trademark therapy of Revici dating back to at least the 1940’s.

The use of plant medicine and essential oil therapies are no longer fringe therapies to be relegated to the tomes of anecdotal healing. Over the last decade a large number of medical studies have emerged showing the various medicinal effects of essential plant oils, and the active compounds they contain, such as sesquarterpenes, monoterpenes, various fatty acid chains, esters, aldehydes and phenols. Essential oils have been studied extensively for their wide range of applications.

Future scientific research on the effects and applications of plant, essential oils holds great promise for therapeutic, non-toxic treatments for a wide number of conditions and diseases.

Despite its denigrated reputation, cholesterol serves as one of the most essential components of all cell structures, as well as the precursor for all of the steroidal hormones. According to current physiology text books, the cholesterol in a cell’s membrane accounts for approximately 25% of the total lipid concentration of the cell membrane. The cholesterol in the cell membrane provides the necessary degree of integrity for the function of the cell.

All of the steroidal hormones are derived from cholesterol: progesterone, cortisol, DHEA, testosterone, estradiol, pregnenolone. It is not unreasonable to consider that low cholesterol concentrations may be a cause of steroidal hormone deficiencies, in many cases.

The Importance Of Phospholipids

Some of the most common phospholipids are the choline-phosphatides such as sphingomyelin and phosphatidylcholine. Although classified as a vitamin, Vitamin E is actually a phospholipid. This discovery was likely initially made by Royal Lee, DDS.

So much attention has been given to omega 3 consumption, that it is often unreasonable to assume there is no possibility of being an excess consumption in the human diet. The truth is that omega 3, like omega 6 and 9 are polyunsaturated (PUFA) lipids. Due to the 2 or more “electron-rich” double bonds which comprise polyunsaturated fats, this class of lipids becomes very reactive in the body, and as such may oxidize with intensity, generating an excess of free radicals.

Whereas, saturated fats possess a far greater degree of resilience due to the lack of double bonds between carbon atoms.

Much intense debate has ensued over PUFA’s, saturated fat and cholesterol over the past several decades. The agricultural industry and its collusion with government has produced dangerous recommendations to consumers for at least 50 years, recommending the consumption of PUFA vegetable oils in place of traditional saturated fats. These unscientifically-based recommendations have undoubtedly resulted in an increase in endothelial inflammatory diseases, due the fact that PUFA lipids are powerfully reactive molecules, which will generate high levels of free radical toxicity when consumed and/or heated.

So much attention in literature has been given to elevated glucose levels in type 2 diabetes, yet so little attention has been given to the free radical toxicity induced by high levels of FFA’s (free fatty acids) among those with diabetes type 2 and insulin resistance. The recommended consumption of PUFA vegetable oils among those with insulin resistance and type 2 diabetes will only further exacerbate metabolic dysfunction, oxidative stress and free radical toxicity.

In Search Of Future Research

The lipid research of the future is potentially very exciting. Because of their essential role in a multitude of biological functions, lipid therapies have a wide range of applicability for a number of situations.

Ongoing nutritional research, which encompasses the importance of lipids in therapeutics will potentially save many people’s lives as well as reduce human suffering.