L-Glycine: The Brain, The Gut, The Tissues 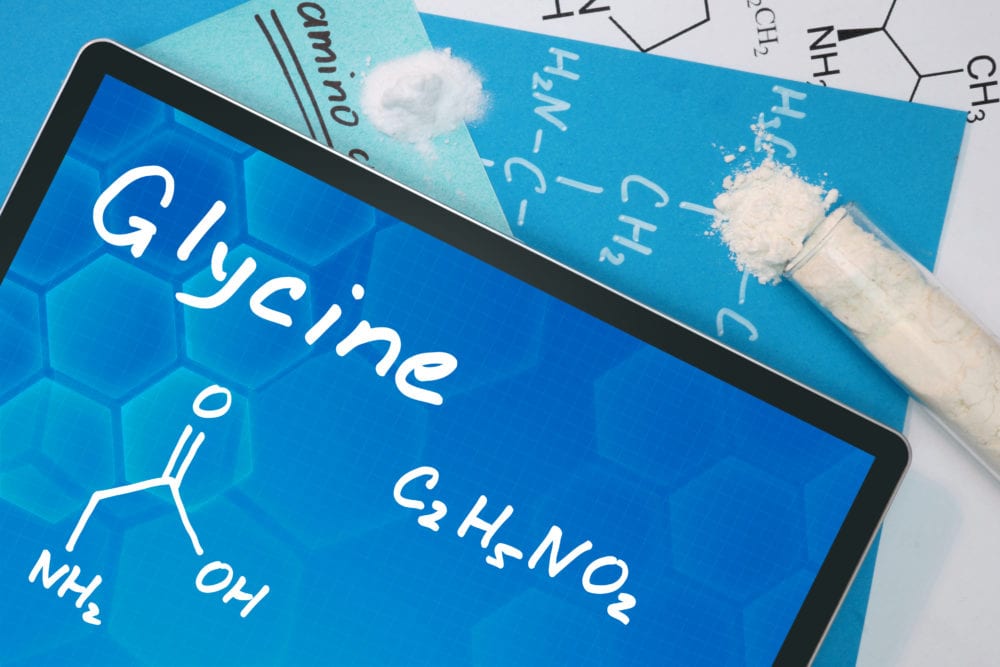 The amino acid L-glycine is among the simplest amino acids, and is the most used amino acid, biochemically speaking. Deficiencies of glycine may have numerous implications on: digestion, brain and cognitive functioning, methylation insufficiency, detoxification as well as connective tissue health.

L-glycine can be derived from dietary sources: meat, fish, legumes, dairy. Glycine is also one of the primary components of collagen and connective tissue. It is found in bone and soup stocks made from bone. It is found abundantly in gelatin. Glycine can be endogenously synthesized as well. Specifically, glycine is made from the amino acid serine, via an enzyme known as SHMT (serine hydroxymethyltransferase). SHMT is a “methyltransferase” enzyme, and as such is a participant in the ‘one carbon’ methylation cycle. Vitamin B-6 is the cofactor to make SHMT to its reversible conversion of serine to glycine.

In the Brain & Nervous System

In the brain and nervous system, L-glycine acts as an inhibitory neurotransmitter. Glycine tends to induce a sedative or inhibitory effect, while also being capable of improving mood and cognition. It may be effective for convulsions and seizures (1), as well as to promote relief from pain, insomnia and headaches. High dose glycine have been shown to control OCD symptoms (2). In a double blind, placebo-controlled trial, high doses of L-Glycine demonstrated an ability to improve symptoms of schizophrenia (5). Glycine has been shown to improve sleep quality (3), as well as significantly improve symptoms that are caused by sleep deprivation (4).

In the Gut: Liver, Bile & Ammonia

L-glycine along with L-taurine are necessary for the synthesis of bile salts. Glycine deficiency may reduce the liver’s ability to synthesize bile. Bile acts as an emulsifier to fats, and is essential for the digestion of fat and fat-soluble vitamins. Bile is also important to inhibit pathogenic bacterial overgrowth, such as clostridium and candida albicans (6, 7).

A lesser known, but important function of L-glycine is to help the body in the removal of ammonia. Ammonia is a powerful neurotoxin, the result of the breakdown of nitrogenous amino acids. Most ammonia is produced from intestinal bacterial over-growth derived from anaerobic microbes such as clostridia, strep and others. The bacteria acts on protein in the intestines, and can produce high levels of ammonia. Ammonia can also be derived from other mechanisms as well, such as from excess skeletal muscle breakdown.

Due to its significant toxicity, ammonia must be removed from the body, or converted into urea. The urea cycle uses amino acids such as ornithine, citrulline and aspartate to convert ammonia into urea. However there are alternate pathways to ammonia removal.

Prior to entry into the urea cycle, the amino acid L-glycine can combine with benzoic acid to form hippurate. Hippurate is then excreted through the urine. Another alternate route to ammonia clearance is with the alpha ketoglutarate to glutamate to glutamine pathway. In this pathway, glutamine is synthesized from glutamate and converts ammonia into phenylacetylglutamate, which then exits the body via the urine.

A glycine deficiency could increase the demands on the urea cycle, as well as on the glutamate pathway. This is not a good scenario because of the potential excitotoxicity of glutamate, and the increased synthesis of aspartate (via urea cycle overload).

Collagen and connective tissue are important components of everything in the human body. Even the bones are surrounded by a collagen matrix, the degradation of which is a core feature in osteoporosis. Collagen makes up the fibrous materials of the body, including skin, tendon, blood vessels, gut lining. 4 amino acids make up collagen: arginine, proline, hydroxyproline and glycine. Of all the amino acids that comprises our skin, glycine is by far the most abundant.

Glycine is also essential for the formation of creatine in muscle. Creatine in muscle derives from a reaction from the enzyme AGAT, which requires both glycine and arginine.

Interestingly, recent studies on glycine have found that in human cell lines in vitro, glycine administration showed the ability to restore mitochondrial respiratory function (8, 9). This information could reveal potential therapeutic benefits of L-glycine on mitochondrial function and epigenetics.

Research from Seneff and Samsel suggest that the pesticide glyphosate may exert its toxic effects by replacing glycine in the connective tissues, leading to potential autoimmune processes against non-degradable glyphosate residues.

Glycine is an effective anti-spasmodic, and anxiolytic. Its ability to bind to the NMDA receptor, which is an excitatory receptor site for glutamate, is one mechanism that seems to put on the brakes for anxiety disorders, panic disorders and insomnia. Based upon these clinical observations, I use glycine therapeutically in certain clinical situations.