Is Your Stomach Too Alkaline? 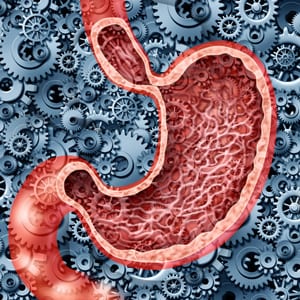 Alkalosis is just as pathological as acidosis. Many people are totally misunderstood and not correctly informed on the issue of acid and alkaline homeostasis. All metabolic homeostatic control systems in the body exist and function in a “negative feedback loop” which follow the principles of dualism.

Many clinicians, naturopthas, dieticians and nutritionists assert that it is “good to be alkaline, bad to be acidic”. It is most certainly not desirable to be a in a state of alkalosis. Alkalosis will result in a loss of hydrogen. A specific type of alkalosis referred to as “Potassium Depletion Alkalosis” is the loss of intracellular potassium and the excess excretion of which from the kidneys. This causes a depletion of hydrogen from the plasma, resulting in a concomitant rise in bicarbonate levels.

Sound complex? It is chemistry, and actually the principles are fairly basic.

Hydrogen is vitally important for your stomach’s production of HCL (hydrochloric acid). The higher the ph of the stomach, the weaker digestive functions will become.

Hydrochloric acid (HCL) is the primary gastric acid secreted by your stomach. Its role in digestion and the regulation of ph in the body is critical for maintaining your health in a number of ways.

HCL: Roles in the Body

The primary role of hydrochloric acid is to sterilize the food you eat and to prevent harmful bacteria from entering the GI tract. HCL also triggers the release of enzymes such as pepsin which are essential for the digestion of protein.

Upon being released by the parietal cells of the stomach, HCL also triggers the release of alkaline bicarbonate into the blood. Its important to mention that HCL production is a major expenditure of biological energy. There are numerous minerals that are hydrochloric acid dependent, chiefly:

Of these minerals, zinc and sodium are both are responsible for the production of HCL.

This means that deficiencies in HCL can and likely will result in the inability to utilize several vitally important minerals and nutrients! Think of the possible nutritional deficiencies, various forms of anemia, and heath issues that can result from reduced or low HCL production!

Most Common Symptoms of HCL Deficiency

Runaway antacid use is a primary cause of HCL deficiency. This causes metabolic alkalosis, and the excess of bicarbonate in the stomach and blood, altering the ph balance. The bacteria helicobacter pylori (H-Pylori) is a bacteria that is present in approximately 50-90% of people. Most people who have H-Pylori have no symptoms of it! H-Pylori shuts down the production of HCL.

An important and interesting discovery made by Jonathon Wright, MD is that people who had the chicken pox virus, often have low HCL later in life. This may or may not be due to the chicken pox vaccine.