Hypothyroidism & the Adrenals: The Intrinsic Link 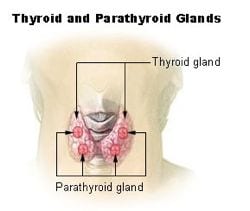 Hypothyroidism is becoming an epidemic. Some studies indicate that as many as 40% of the population has some degree of hypothyroidism. Low thyroid functioning results in a metabolism that is inefficient.

There are many factors which will impede upon the normal functioning of the thyroid: Toxicity: fluoride, mercury, chlorine, aluminum, Nutritional deficiencies like zinc, selenium, iodine.

It is well known that fluoride and chlorine block iodine receptors, reducing the thyroid’s ability to uptake iodine, its most essential nutrient. Mercury will have a similar, toxic effect on thyroid function, augmenting T4 to T3 conversion.

Likely accompanying toxicity in hypothyroidism is nutritional deficiencies as well. Eating in a way that is not compatible with your specific metabolic imbalances and needs is a major blocking factor. Inefficient energy production can result in any number of problems, including low thyroid functioning.

Many people who develop hypothyroidism end up in fast oxidative, glucogenic metabolism, or in an over-reactive parasympathetic state. For such people, there is an increased demand for very specific types of foods and nutrients, while a decreased need of other foods and nutrients.

Selenium is a trace mineral that is essential for the liver’s conversion of T4 into T3. Selenium deficiency is actually quite common today.

The Thyroid and the Adrenals

A deeper look at adrenal, hypothalamus and thyroid relationships shows how weakened or burned out adrenal glands will cause a cascade of problems for thyroid functioning. 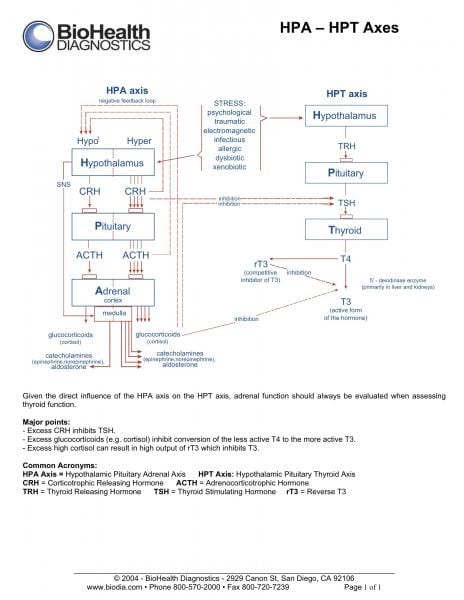 As the HPA-HPT Axis illustrates, the adrenal-derived glucocorticoid hormones (which includes cortisol) can inhibit the conversion of T4 to T3. Someone with high cortisol output is in danger of low thyroid function! In addition, high cortisol output can result in excess production of negative T3, also called rT3. rT3 will compete with the production of the more essential T3, which is another way the thyroid is inhibited.

CRH (cortico-tropin releasing hormone) is released by the Hypothalamus in response to stress. It too can inhibit thyroid function by blocking the production of TSH (thyroid stimulating hormone).

On top of this, if a person has mercury toxicity (from let’s say mercury-containing dental amalgams) and is not eating ideally for their type of metabolism, the likelihood of developing hypothyroidism is substantially high.

The best way to identify adrenal hypo or hyper function is NOT through blood tests. Blood cortisol levels are not accurate because they are not the ‘free-fractioned’ hormones. The best way to test cortisol and other steroid hormones is through the saliva.

While thyroid medication may be necessary to prop up thyroid function, it does not address the causation of thyroid dysfunction.

In order to restore the proper functioning of the thyroid, it is essential to address the underlying issues, which likely include: toxicity, nutritional deficiencies and stress; as well as the body’s eventual breakdown and dysfunction due to these factors.