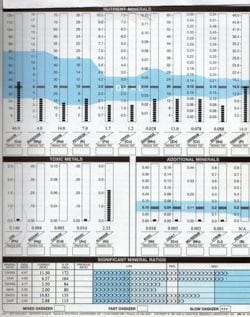 Hair tissue mineral analysis (HTMA) is a very interesting and unique laboratory biopsy. It is capable of revealing unique mineral patterns, which upon closer investigation reveals much regarding certain physiological activity. Hair analysis is a biopsy of soft tissue, reflecting what has been deposited into it over a 3-4 month period of time.

On a hair test, one of the most important components of the analysis is the mineral ratios. The intrinsic relationship that exists between major nutrient minerals is very revealing of the effect of glandular activity. When I was trained in HTMA by my mentor, he always pointed out to me that of all of the mineral ratios, the most important was the ratio between sodium and potassium. I always payed attention to that statement through the years, but it took me 5 years to fully appreciate what he meant.

These two electrolytes on a hair test tell a lot about adrenal function. I have come to learn that potassium is strongly influenced by cortisol and sodium is influenced by aldosterone. What’s more is that the balance between these 2 minerals is revealing of underlying patterns of a person’s vitality, mood, behavioral tendencies and detoxification capacities.

The adrenal glands produce hormones which have regulatory effects in many areas of the body. For example, cortisol is used to combat stress, infections and inflammation.

At the cellular level, sodium and potassium make up the “sodium-potassium pump”, which is a primary, active transport for ions in and out of cells. Potassium is kept in the cells, sodium is moved out of cells. This transportation process is equivalent to 1/3rd of the cells’ energy expenditure. The “sodium-potassium pump” is a major process which regulates many critical cellular functions such as calcium activity, signal transduction and even the regulation of ROS (reactive oxygen species) and the formation of free radicals.

Several medical studies indicate that toxic metals, such as mercury, directly alter the effect and functionality of the sodium-potassium pump.

An interesting observation I have made is that on a hair test, when the sodium and potassium ratio is between roughly 1.9-4.00, there is a tendency for a concomitant mobilization of toxic metals in amounts higher than if the ratio is out of this range. When this ratio falls below 1.9 or so, toxic metal mobilization is much less, as revealed by decreased values on that particular hair test. When the ratio is greater than 4.0-4.50 it is much less common to see toxic metals being mobilized in significant amounts.

The ‘metal mobilization’ range of 1.9-4.0 is a rough value and not absolute. If on a previous hair test, the person’s Na/K ratio was between 1.45-4.0, and then the subsequent, follow-up test revealed a Na/K ratio greater or less than 1.9-4.0, it is common to see a decrease in metal mobilization on that new test. Also, it is very common that if the Na/K ratio on an initial test is less than 1.9, and on the follow-up test the ratio improves to the 1.9-4.0 range, the amount of metals excreted is higher on the follow-up test.

If one follows the logic of the importance of sodium and potassium in the regulation of energy at the cellular level, it makes sense that the interference of mercury, and other toxic metals will inhibit and reduce the functionality of this ratio, and consequently the efficiency of metabolism, cell activity and detoxification.

It is believed that the major blood protein Albumin has a certain degree of regulatory effect upon the sodium-potassium pump. In addition to this, studies have shown thatAlbumin modulates cellular Glutathione levels. Glutathione is the body’s master, endogenous antioxidant, which has a powerful effect on the detoxification of toxic metals.

It is believed that glutathione therapy is one of the most beneficial ways to assist the body’s detoxification of toxic metals and chemicals. Although I don’t have enough data to make any definitive conclusions, it appears that tissue metal excretion may be more influenced by the dynamics of the Na/K ratio, than if cellular glutathione levels are brought high enough. Again, more data is needed to validate this hypothesis.

I postulate that the ratio of Na/K on a hair test is influenced by several factors:

While improving the Na/K ratio on a hair test should be viewed as a primary objective, in my opinion, how this is achieved is not the same for each person. Biological individuality must be considered. In some instances, if the sodium is low in relation to potassium, increasing dietary mineral salts can have great benefit. This may be especially true if the hair sodium is less than 10mg%.