Healing The Intestines: Returning to the Use of Traditional Food As Medicine 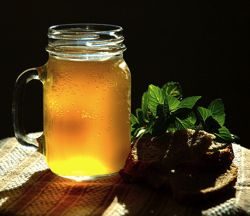 Healing gut and intestinal mucosal barrier function is about normalizing the intestinal flora. It is a fact that 80% of the immune defenses of the body is the intestinal bacteria. A healthy gut immune system contains approximately 100 trillion microorganisms.  These microorganisms are the body’s first line of defense against pathogens, and pathogenic infections.

Additionally, a healthy gut is absolutely essential for healthy digestion and assimilation. A healthy gut is needed for the endogenous production of digestive enzymes and certain B vitamins. A compromised gut may also involve issues associated with hormone and neurotransmitter imbalances. For example, 90% of the neurotransmitter serotonin is located in the gastrointestinal tract. Dysregulation of serotonin levels is often linked to loss of normal gut function.

From mouth to anus there is a mucosal barrier which contain several different immune antibodies known as immunoglobulins. The most common of these immunoglobulins are IgA, IgG and IgM. The primary function of theses immunoglobulins is to identify and neutralize potentially harmful bacteria, viruses and pathogens.

When there is intestinal dysbiosis, there is a loss of function in the gut. Loss of normal gut function can result in an unknown number of symptoms and disease processes. Additionally, with a loss of intestinal mucosal barrier function there may be an overgrowth of pathogens, parasites, fungal and yeast overgrowth.

Many of the most common symptomatic conditions associated with a loss or lack of normal gut function include: autoimmune conditions such as lupus, Crohn’s, RA and MS, issues associated with chronic fatigue, IBS, hyperactivity, ADD, ADHD, dyslexia and schizophrenia.

The intestinal lymphocytic T helper cells in many ways regulate the inflammatory processes of the body through their activation of other immune cells and immune mediated responses. When immune signaling goes haywire, unregulated inflammation takes place. This can lead to an unknown number of complications and health issues, and with that, a catabolic destruction of cells and tissues.

Numerous researchers also believe the overload of immunizations and chemical and metal toxicity as key factors in the development of gut dysbiosis-related conditions.

Depletion of nutrients in the Standard American Diet and the over-consumption of sugars will also have a negative impact upon GI function and intestinal flora.

Loss of adaptive immunity in the gut is now being recognized by medical science as a primary origin of many disease processes.

Therapeutic dose probiotic supplementation can be without a doubt tremendously beneficial for those with compromised gut function, autoimmune conditions and with pathogenic infections. An endless variety of probiotics and GI support formulas make it difficult for the consumer to choose the best product for his or her body.

Additionally, restoring gut immunity becomes a highly individualized issue, one that very often requires the help and intervention of a professional.

There are fundamentals of health that take priority before any types of supplementation, such as consuming high quality foods that are in harmony with one’s type of metabolism, as well as the elimination of foods that harm instead of heal.

So many people living in modern times are nutritionally deficient. The Standard American Diet (SAD) is so devoid of nutritional density, there is no comparison between it and the foods once consumed by traditional cultures.

An in-depth inspection of traditionally consumed foods, reveals the nutrient density of cultural cuisines. Traditional cultures such as native Americans, African Tribes and European cultures considered the importance of consuming the entire animal, instead of specific cuts of muscle meat. This includes the consumption of nutrient-dense organ meats, which are by volume the most nutrient dense of all foods.

Nourishment of The Whole Animal

Anthropological study into the diets of native Americans reveals the consumption of the entire animal for nutritional purposes. This includes the organs, bone and bone marrow, connective tissue, collagen, tendons and ligaments.

Nutritional research reveals that animal-based connective tissues, tendons, ligaments and bone contain significant concentrations of a class of molecules known as glycosaminoglycans. These substances include hyaluronic acid, glucosamine, chondroitin sulfate and are very rich in gelatin. All of these components are naturally very healing for mucosal areas of the body, which do not only pertain to parts related to joint mobility, but also to intestinal mucosal function as well.

It is for this reason, that many gut repair strategies give close attention to the inclusion of bone broth soups, chicken stock, gelatin and consuming the connective tissues and ligaments.

Traditional cuisines also featured foods that have been cultured and fermented, which are rich with naturally occurring probiotics, enzymes, b vitamins and can be one of the better methods for improving intestinal function and reducing inflammation. Traditionally fermented foods include sauerkraut, kimche, kvass, sourdough, kefir, yogurt, natto, miso, cultured fruits and vegetables and even fermented meats.

Traditional diets also gave consideration to the use of herbs and foods such as garlic, ginger, licorice and turmeric, all of which possess potent anti-inflammatory properties. For example, turmeric is known to inhibit both COX and LOX inflammatory pathways.

Raw colostrum is also a very rich source of the potent antioxidants lactoferrin and hemopexin. Lactoferrin is one of the primary constituents of the mucosal immune system, which comprises approximately 80% of the immune system. Colostrum is a very rich source of PRP’s (proline-rich polypeptides). PRP’s are powerful modulators of the immune system, activating it when infections are present, and de-activating it when less needed. PRP’s have also been shown to protect against viruses, fungal infections and cancer. PRP’s also have powerful antioxidant properties and have demonstrated  the ability to prevent DNA damage.

The constituent proteins in whey include lactalbumin, lactoferrin and lactoglobulin. Lactoferrin has been shown in vitro studies to have both immuno-stimulating and immuno-regulating effects. TGF-ß (transforming growth factor beta) is a protein found in mammalian whey which has been strongly associated with a reduction in allergic reactions in children.

Raw butter and cream are tremendously rich sources of SCFA’s (short chain fatty acids) such as butyrate. Research has uncovered that certain SCFA’s such as butyrate can powerfully modulate gut mucosal immunity. Inflammatory bowel diseases such as Crohn’s and ulcerative colitis tend to respond very favorably to butyrate administration. Studies have shown that butyrate modulates pro-inflammatory cytokines such as interleukin-6 and TNF-a (tumor necrosis factor alpha). Raw cream and raw butter are also very rich sources of fat soluble, antioxidant vitamins such as vitamins A, D, E and K, as well as phospholipids. Phospholipids are primary constituents of all cell membranes.

The deep desire to obtain better health is the very first step in the right direction. Many people never get this far. It is more common for people to seek cures, quick fixes and drugs, without giving attention to their lifestyle choices, food choices or how they think and believe what they do. It is for this reason that many people do not get well.

Those who are sick and tired of being sick and tired, are motivated and are driven by their desire to heal, are the people who are on the path towards true health.