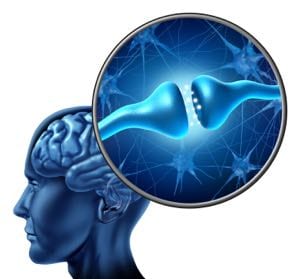 Emerging scientific research has not only identified glutamate excitotoxicity as a core etiology in numerous degenerative conditions, an emerging body of literature also demonstrates the potent neuro-protective effects of certain nutritional herbs and botanicals. These neuro-protective effects have shown to protect against the cascade of glutamate-induced excitotoxicity, and the subsequent neuronal cell death that ensues.

A growing list of neuro-degenerative conditions exist, which have shown to feature glutamate excitotoxicity. Some of these include:

As a neurotransmitter, glutamate is actually one of the most abundant molecules in the brain. Under normal circumstances, glutamate gets converted into the inhibitory neurotransmitter GABA. The gene/enzyme most responsible for this reaction appears to be GAD1 (glutamate decarboxylase). GAD1 uses the B-vitamin, P5P (Vitamin B-6) as the cofactor for this conversion. Deficiency of GAD1 enzyme activity is known to lead to a condition known as “Pyridoxine-dependent epilepsy” (9, 10). It seems plausible that this type of epilepsy strongly features glutamate overload and GABA deficiency.

A lesser known, but important role of glutamate is in nitrogen removal. The resultant reaction of the glutamate dehydrogenase enzyme is to release ammonia. Ammonia, which itself is neurotoxic, must be converted into urea in the liver. If there are problems with the urea cycle, and the ammonia to urea conversion, ammonia builds up and can lead to a list of serious symptoms, such as: seizures, hyperventilation, lethargy and vomiting. Seeking the source of ammonia toxicity should definitely account for possible glutamate overload (11).

With all of the craze surrounding the use of 5 methyltetrahydrofolate (5-MTHF) supplementally to bypass certain MTHFR gene mutations, it should be pointed out the frequency of adverse reactions to methylfolate supplementation is rather common. Among the primary adverse reactions to methylfolate are symptoms of: anxiety, mania, aggression, and headaches. Why?

Folates, also known as Vitamin B-9 are of different forms. Some of these include: Folinic acid (5-formyl tetrahydrofolate), Folic acid, 10-formyl tetrahydrofolate and 5 methyl tetrahydrofolate. Folates are comprised of numerous glutamic acids conjugates. The higher the dose of folates, the greater the propensity towards an increase in the pool of free glutamate. Hence, the “excitatory” and neurological types of adverse effects of folate in certain individuals.

Additionally, folate (in the form of tetrahydrofolate) is a cofactor in the conversion of the amino acid histidine into glutamic acid. The compound FIGLU (formiminoglutamate) is the intermediate in this reaction (12). This is why elevated urinary FIGLU is an indicator of a folate deficiency.

Once the free pool of glutamate increases, glutamate receptors, such as NMDA are over-stimulated. This then causes a massive influx of calcium ions into cells, resulting in neuronal cell damage, and cell death.

Essentially any type of “non-self” molecule is capable of setting off microglial activation in brain and neuronal tissue. This is inclusive of various pathogens and antigens, viruses, vaccines, adjuvants, and any foreign substance that crosses the blood-brain barrier.

While the search for drugs to attenuate and prevent neuronal cell degeneration has been in place for many years, a number of nutritional and botanical approaches are promising and effective.

Before reviewing possible nutritional and botanical therapies, it is first essential to understand the glutamate receptors. There are 2 different classes of glutamate receptors: ionotropic and metabotropic. Both types of receptors use various ions to accomplish transmission, but the ionotropics tend to be more rapid in relaying signaling.

Of the 3 different ionotropics, in terms of excitotoxicity, the NMDA (n-methyl d-aspartic acid) receptor has received the most attention. When the free pool of glutamate increases (and potentially other types of excitotoxins as well), the NMDA receptor gets over-loaded, resulting in a massive influx of calcium ions. This excitotoxic cascade then triggers various inflammatory and cell-destructive enzyme reactions, resulting in neurotoxicity and cell death.

Zinc picolinate has shown some neuro-protective effects, but primarily against the excitotoxic effects of quinolinic acid, but not glutamate (19).

It is important to address that the above discussed botanicals have been used in Traditional Chinese medicine systems for hundreds, or possibly thousands of years. Recent scientific research has extensively investigated the constituent properties of these herbs, as well as their chemical effects on glutamate excitoxicity, and the associated neurotoxic cascades.

The implementation of any botanical is best done under proper guidance through an herbalist with the necessary skill set, for pairing herbs for the individual in question. In this way, one is able to determine the best uses of certain herbal formulations.