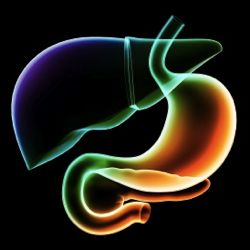 GERD, otherwise known as esophageal reflux disease can actually be seen as a compilation of various symptoms. The term GERD itself is quite a non-specific disease label, which fails to address the true etiology of its associated symptoms. This article will attempt to address some of the most common clinical presentations of GERD, as well as possible common causes of dysfunction leading to symptoms.

GERD is most commonly diagnosed through the manifestation of clinical symptoms alone. It is treated primarily with acid blocking medications such as PPI’s (proton pump inhibitors). This is quite curious because upon closer analysis, in many instances GERD and its associated symptoms of acid reflux appear to be only the tip of the iceberg. Closer empirical observations seem to indicate a panoply of stomach and/or gut-related issues, which exist concomitantly with GERD symptoms. Other common presentations in people with GERD include:

The Stomach Is Supposed To Secrete Acid

The stomach and its highly acidic environment is a critical part of your digestive system. The 3 primary and essential functions of stomach acid are:

The human stomach has evolved to contain and produce highly concentrated amounts of hydrochloric acid. Gastric acid is needed for protein digestion, nutrient absorption as well as for the protection against foreign pathogens. It is believed that as many as eight essential amino acids are dependent upon gastric acid for utilization, and several minerals are properly absorbed with the aid of stomach acid.

The epithelial cells of the stomach are designed to protect underlying tissues from being damaged by gastric acid. To allege that GERD is caused due to a high production of stomach acid is highly presumptuous, and may very well be a dangerously false myth that has never had any science to support it.

There is a very large body of empirical evidence that suggests that, in most instances acid reflux is being caused by too little stomach acid, not too much.

The Heidelberg pH test is one piece of evidence in these regards. The Heidelberg test is a precise mechanism devised by German researchers to detect specific pH activity in the stomach and duodenum. Clinicians who have used the Heidelberg test, such as Jonathan Wright, MD state: “Since 1976, I’ve checked literally thousands of individuals complaining of “heartburn” and indigestion for stomach acid production using a commercially available, extremely precise, research-verified procedure. Over-acidity is almost never found, especially in those over age 35” (credit: The Digestive Theory of Aging).

Endless reports from patients have surfaced that upon taking apple cider vinegar, an inexpensive, commercially available food with 5% acidity, acid reflux symptoms totally abate. Is this the solution for all people with GERD or reflux? No. Is hypoacidity, otherwise known as hypochlorhydria a primary cause of acid reflux and GERD for a large percentage of people? Yes.

Why is it that so many people with acid reflux experience an immediate resolution of their symptoms when taking acidifiers such as vinegar or HCL (hydrochloric acid) capsules? What is postulated is that low stomach acidity triggers the esophageal sphincter to open, thereby causing an ejection of acid into the esophagus. Its clear that more research on this specific function is needed in order to understand the complex signaling between the stomach and esophagus.

Other Factors Associated With, Or Other Possible Causes Of GERD

Can H Pylori be a major cause of GERD? I think it should be considered as a primary suspect in many cases. It is well known that H pylori inhibits gastric acid secretion.  It is also established that esophageal reflux is more often caused by low levels of gastric acid, otherwise known as hypochlorhydria, or achlorhydria.

H pylori has been proven to be a primary cause of peptic ulcers, as well as gastritis. It is also believed to play an important role in the development of gastric cancers.

A common clinical observation is that many people with GERD respond so favorably to taking HCL supplementation, or acid-containing vinegar, that the symptoms may totally abate. However, it appears that if HCL or vinegar make symptoms of GERD worse, H pylori infection is more likely to be present. This may be due to the proliferation or interaction of the bacterium with the ingested acid. H Pylori is able to survive the stomach’s normally acidic environment. The strong response to acidifiers in people with H pylori seems to indicate the bacteria proliferating, or driving deeper into the gastric mucosa.

Considering the prevalence of gut-related symptoms in those with an active H pylori infection, a more scientific discussion would be trying to prove that H Pylori does NOT trigger GERD-related acid reflux symptoms.

Research on H Pylori indicates that this bacterium may be doing a lot more than meets the eye. In addition to producing gut-related symptoms, H pylori is well documented toincrease ammonia levels. Ammonia is highly toxic. In fact, studies on ammonia indicate that upon administration to rats, there are significant decreases in the essential scavenging antioxidants: glutathione peroxidase, superoxide dismutase and catalase. Ammonia administration further resulted in major increases in brain and liver superoxide radicals.

Besides inducing gut-related symptoms, evidence suggests that H pylori may also induce other conditions as well:

It is believed that many people with GERD symptoms are actually suffering from bile acid reflux. This is caused by a spilling of bile acids from the duodenum into the stomach. Many people following gall bladder removal surgery suddenly report experiencing reflux symptoms. This seems to indicate that the surgery to remove the gall bladder results in a further onslaught of symptoms.

A recent study demonstrated the high prevalence of GERD with Celiac patients. This same study demonstrated an enormous improvement in GERD symptoms following the removal of gluten from the diet. Celiac disease is an autoimmune disease that involves an inflammatory reaction to gliadin, a gluten-containing protein. Current estimations are that as many as 1 in 105 people in the US may have celiac disease.

Its important to point out that many people have gluten intolerance without having true celiac disease. Gluten intolerance or gluten sensitivity can be due to a gluten allergy or another type of immune response to gluten or gliadin.

It is common clinical procedure nowadays that most clinicians recommend eliminating gluten-containing foods entirely in people with all types of autoimmune diseases, not just celiac.

It would hardly be a complete article on GERD without mentioning the acid blocking medication industry. Repeated studies have shown the major side effects associated with the long term use of these medications. For example, the literature shows the high prevalence of osteoporosis and bone fractures of all types with use of proton pump inhibitors (PPIs) and H2 blockers.

This is most likely due to the acid blocking medication’s effect on mineral and protein uptake. Remember that gastric acid is critical for mineral utilization, as well as for protein synthesis. After all, osteoporosis is as much due (if not more) to a loss of collagen (a protein matrix) surrounding bone, as it is a mineral imbalance issue.

Acid-blocking medications are well established to induce severe mineral and nutrient deficiencies, such as hypomagnesemia, B-12 deficiency, calcium deficiency and iron-deficient anemia.

Acid blocking medications TRIPLE the risk of developing the serious, anti-biotic resistant infection Clostridium Difficile (C Diff). H2 blockers are known to increase the risk of pneumonia and other infections.

Are acid blocking medications even worth the risk? Its quite clear, that if one is only willing to address the level of their health problems at the level of the symptom, there can be very severe consequences.

When it comes to issues related to GERD and acid reflux, all possible causes should be sought out and uprooted. Doing so will greatly benefit one’s health, especially in the long term.