Escape From The Medical Maze Of “Healthcare” 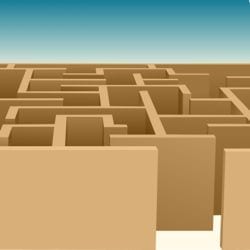 Rightfully so! Allopathic medicine’s approach to health and its treatment of disease is an endless abyss, leading one down paths of perpetual and endless drug use, exorbitantly priced, elaborate medical procedures and testing, and the promotion of endless human suffering for profit. Let’s not beat around the bush: the current system of sickcare is a total monstrosity and over-bloated behemoth, one which does nothing whatever to improve the biological health of the individual.

But here’s the catch: this is what most people want. Most people want to have an authority figure to place their trust into, so that they don’t have to be responsible for their bodies. The medical establishment and pharmacology know this. And this is why drug ads on TV are designed to invoke a sense of fear into the listener. When a person is in a place of fear, they are desperate to do whatever it takes to get rid of the fear. And as such, lose the ability to make rational decisions.

The road to health doesn’t have anything to do with the methods of western medicine. Western medicine’s methods involve the identification and treatment of disease. And it will go out of its way to find something wrong with you, or even make up a disease name, solely for the sake of selling a new drug. Health is not something you get feared into taking. It is a practice, a continual effort to improve the way you eat, live, think and breathe. Health is a process, as is reclaiming your health from illness. Unlike medicine’s authoritative approach of having an educational dominance over patients, the road to health is about recognizing yourself as authority and learning how to trust and honor your body’s inherent needs.

A typical physician is in a powerful position of authority over an unassuming patient. In some instances, the psychology of this relationship is very dangerous and threatening to the rational decision making faculties of the patient. Any time that an authority figure is in a position of power over someone, the opportunity of unassuming control can take place.

The overwhelming majority of people have been conditioned from a very young age to believe that doctors are the authority figures and should hand over their health to them. This power trip is what creates a society of people who cannot think for themselves. Many elderly today have been carrying around this mentality for decades, and indeed this generation is preyed upon by pharmacology and their medical cohorts. As of 2008, data complied by the U.S. Department of Health & Human Services indicates that in the month prior to this study, 90% of adults age 65 and older have taken prescription medications. This figure has been continually on the incline, up 6% since the previous decade.

Further 2008 statistics indicate that MORE MONEY is spent on so called “Healthcare” per person in the U.S. than any other nation in the world. 27% of adults over the age of 65 are Diabetic. 14% of adults between 45-64 are Diabetic. Roughly 25% of men 75 or older will have had cancer in their lifetime, compared to 20% of women in that same age group. 22% of women between 45-64 are taking antidepressant drugs. Between 2005-2008, antidepressant med usage has more than QUADRUPLED in every age group of women compared to previous stats during 1988-2004. Perhaps the most startling statistic: between 2007-2008 nearly 20% of children between the ages of 6-11 are obese. And you still want to call this model “HEALTHCARE”?

It is very clear that the current model of “healthcare” is not related to health in any way. If you go to a typical physician everything they do is to see if there is something wrong with you. Even if they wanted to, most physicians are not capable of knowing how to improve your quality of health. Physicians are not trained in healthcare, they are trained in disease care and the use of drugs, surgery and diagnostics. They will try to find something wrong with you so they can medicate you or refer you to do additional testing.

Having health is a dangerous weapon against the established model of the sickcare system. Because if you have health, and especially a greater knowledge and insight about how to be healthy, and what actually constitutes health, you are not in the system. What if you were armed with enough information about health that you could actually replace the need to have a physician?

Such a radical position is only possible if one has the entrenched desire to get out of the mainstream medical maze and to truly take ownership. The ability to replace the need for a primary care physician is a possibility for those with a sense of self-responsibility. But in order for self-responsibility of one’s own health to be a focus, one needs to radically change their conditioned way of thinking. There must be an intense desire for transformation, as well as a desire to really learn about what health really is and what builds it.