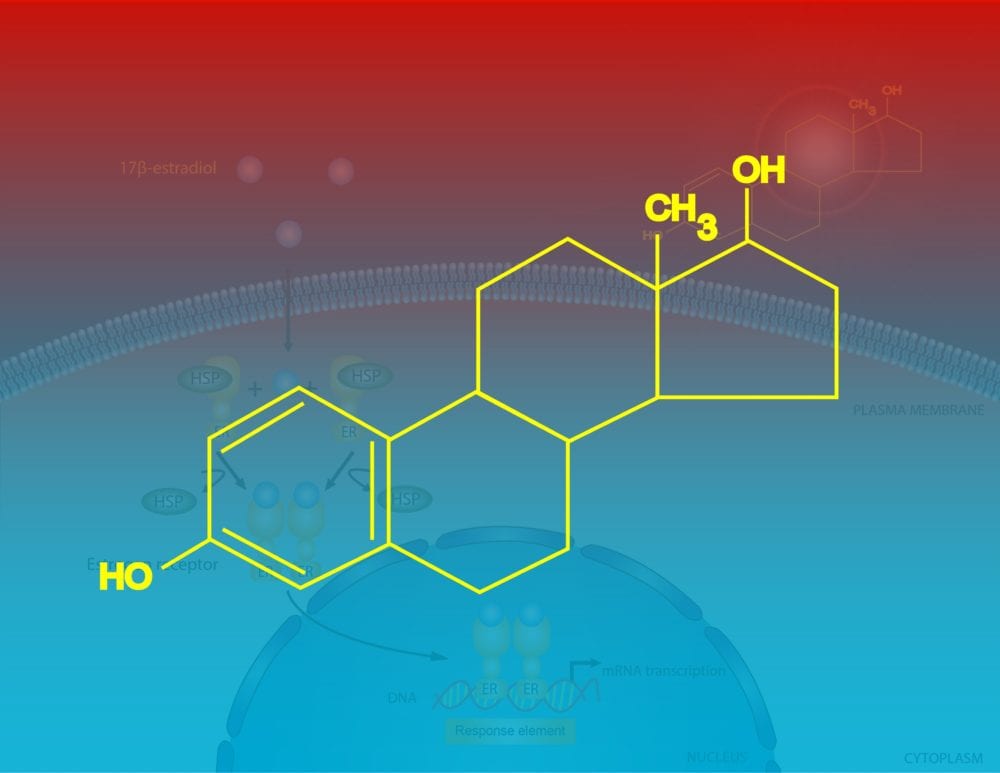 Estrogen dominance is a term that has been used to describe the overload of estrogen. Estrogen overload can be problematic for a number of reasons. For women, excess estrogen activity can alter the menstrual cycle, leading to complications such as PMS. In more extreme scenarios, excess estrogen can lead to conditions such as endometriosis, cancer, hyperplasia, and abnormal cell proliferation. Abnormal estrogen is also implicated in autoimmune diseases such as Rheumatoid arthritis, lupus and MS.

4 hydroxy estrone (4OHE1) and estradiol (4OHE2) are very reactive estrogens. They are highly prone to the formation of catechol estrogen-derived 3,4 semi-quinones, which are potent, electrophilic, free radical-generating molecules that have been shown to lead to DNA mutagenesis (10). Indeed, 4 hydroxy E1 and E2 are the most potent and potentially carcinogenic estrogens.

It is now well understood that certain estrogens increase cell growth and proliferation more than others. With the advent of genetic test analysis it is now possible to identify inherited strengths and weaknesses of certain gene variants that are encoded in certain estrogen-specific biochemical pathways. This data can be used clinically for the purpose of constructing meaningful and evidence-based protocols, which aim to positively influence the pathways of estrogen metabolism. One section in the Metabolic Healing Nutrigenomics report features estrogen metabolism genetics.

Its important to address however, that genetics testing is not enough by itself to understand what the problems are. Ideally, one pairs a genetics test with a urinary sex hormone test. Urinary sex hormone testing is now the industry standard in our opinion, primarily because it is providing an evaluation of estrogen metabolites. On occasion, it is useful to measure the SHBG in serum (sex hormone binding globulin), which can reveal the level of bound versus unbound sex hormones. Elevations in the SHBG will reduce the availability of sex hormones to cells.

Clinically speaking, we find it very useful (and exciting) to pair the major genes of estrogen metabolism, side-by side with the actual molecular products of the enzymes.

Estrogen Metabolism: Phase I and II

Estrogens are formed from the androgenic hormones testosterone and androstenedione through the process known as aromatization. The enzyme which encodes for aromatase is CYP19A1. Once aromatized, estradiol (E2) and estrone (E1) undergo hydroxylation through 3 primary enzymes to generate their respective hydroxylated end products:

The literature identifies that the 4OH molecule is highly reactive. It is accepted as a carcinogen, largely because of its propensity to form the 3, 4 semi quinone free radical, which can form unstable DNA adducts. A DNA adduct is literally when a molecule adheres to a segment of DNA. This can cause changes in genomic activity, and if left un-repaired, these adducts can cause mutagenesis.

CYP1B1 is the main enzyme that catalyses the formation of 4OH molecules. The genetic risk allele for CYP1B1 appears to encode for an increased function of the CYP1B1 enzyme. In addition to the hydroxylation of E1 and E2, CYP1B1 also hydroxylates a number of environmental chemicals into volatile, carcinogenic intermediates. This fact complicates the matter of estrogen carcinogenicity, especially in light of the fact that carriers of the risk allele for CYP1B1 already tend to have increased enzymatic function. Epidemiological studies have found increased colon cancer risk among carriers of the CYP1B1 risk allele, who consume well done meat. The reasoning for this is very likely due to the fact that high temperature cooking of meat increases the formation of polycyclic aromatic hydrocarbons, which are metabolized into carcinogenic intermediates via CYP1B1.

The reality is that numerous environmental chemicals are metabolized into carcinogenic intermediates via the same major estrogen hydroxylation enzymes. This includes CYP1A1, CYP1B1, CYP3a4 and CYP19A1. The toxic metal cadmium, for example will avidly bind to the estrogen alpha receptor (estrogen accelerator) (11). The implications with how toxic metals and chemicals affect enzyme function are several-fold. Besides the increased and decreased activation of these enzymes, many toxic compounds are mutagenic and DNA-damaging. So their avoidance is essential, but so is the activation of the phase 2 detoxification processes, in order to eliminate them.

Phase II methylation of estrogen is locally governed via the COMT enzyme (catechol oxygen methyltransferase). The methylation of 4OH E1 and E2 inactivates and effectively neuters the volatile 4OH molecule. Methylation is, afterall a central process in the inactivation and detoxification of a number of molecules, catechol estrogens being one.

The genetic risk allele of COMT encodes for a downregulation of enzymatic function. At this point you can see the problem when an individual possesses risk alleles for both CYP1B1 (upregulation) and COMT (downregulation). Activation of a volatile molecule is higher, inactivation of the molecule is lower. Still, the other remaining gatekeepers that protect from DNA adduct formation function to detoxify the volatile catechol estrogens.

NQO1 (quinone reductase) and GSTM1 (and GSTP1) are important enzymes which detoxify the semi quinone radical. NQO1 is a quinone reductase enzyme, whereas GSTM1 and GSTP1 are glutathione transferases. 3,4 semi quinones are highly unstable free radicals, which are capable of setting off chain reactions of other free radicals and oxidants. This includes: hydroxyl radicals, peroxynitrite, hydrogen peroxide and superoxides. These oxidants and radicals are genotoxic, and must be quenched and/or detoxified, or else problems may ensue.

For one, the ability to synthesize glutathione and the constituent amino acids (namely cysteine) is contingent upon proper function of the methylation one carbon cycle, and the transsulfuration pathway. Enzymes such as MTHFR and CBS are important components of these pathways. Glutathione function is also dependent upon the presence of mineral cofactors such as selenium (for the formation of glutathione peroxidase) and magnesium (a cofactor that activates the glutathione synthetase enzyme). Several B-vitamins play a central role in various enzymes involved in the synthesis and utilization of glutathione, namely B-6 (for CBS activation) and Vitamin B-2 (for FAD synthesis). Additionally, being a redox antioxidant, the ability to maintain sufficient reduced (usable) glutathione is contingent upon the redox cofactor NADPH.

Provided there is sufficient glutathione activity, the removal of DNA-damaging free radicals is a regular event inside of cells. In the event of mutagenesis, insufficient DNA repair and the initiation of tumorogenesis, these mechanisms of cellular defense are likely compromised significantly. Un-repaired DNA damage is a major cause of cancer initiation.

A significant body of literature has identified a number or nutrients, botanicals and nutrient compounds which have varying effects on the estrogen-metabolizing and detoxifying pathways. Implementation of many of these compounds through an individualized process affords great potential for those affected by the potentially deleterious effects of aberrant estrogen metabolism.

Let’s take a closer look at a handful of these nutraceuticals and botanicals.