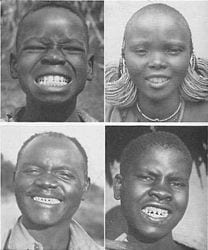 Weston A. Price, DDS unequivocally demonstrated the power that food has on human health more than 70 years ago. The native people that he studied and lived with, who maintained an ancestral diet, were the healthiest cultures anywhere on earth, virtually free of all disease. And those cultures who adopted modernized eating habits exemplified significant forms of physical degeneration in only one generation of adaptation.

Update the world situation 70 years. Humans have rapidly polluted the planet, degraded the soil, polluted the resources with man-made chemicals and toxic metals, and have introduced artificial foods and genetically engineered organisms into the natural order. Disease and degeneration is on the rise, very rapidly. Children are being born into this world sick, toxic and malnourished. Many expectant parents’ knowledge of what constitutes health is frighteningly absent.

Western-based medicine offers no solutions. Its collusion with pharmacology has degraded the face of medicine and science, and by itself has caused death and disease of immense proportions. A very large percentage of physicians today are totally unequipped to care for people and offer no solutions other than an endless array of drugs, surgery, vaccines and poison. The trust that the unconscious herds of humanity instill in their physicians is ungrounded because “the emperor has no clothes”. Many physicians’ actual knowledge of what health is, doesn’t exist either. The collusion between pharmacology and medicine has resulted in a continuous production line of physicians who are only capable of selling endless drugs to patients. Few physicians are capable of breaking out of the conditioned way of thinking which has been bestowed on their consciousness by medical institutes.

The instinctive wisdom our ancestors once possessed is all but lost in the booming cultural quagmire of modern society. A massive percentage of civilization possesses no knowledge of what constitutes health.

For a great portion of the 20th century, women were advised by their physicians not to breastfeed, and instead were offered artificially made formulas for the nourishment of their children. Breast feeding of course is the greatest source of nourishment for an infant. It is the act of an infant inheriting the immune system of his or her mother. In addition, breast feeding provides the essential lipids, saturated fat and cholesterol necessary for the developing brain of the infant.

Deprived from a breast fed child is the appropriate implantation of immunoglobulins, which constitutes 80% of the immunity. Children not breast fed are deprived of vital nourishment.

Many pregnant women are unequipped to bear a child today. So many women today are undernourished, toxic and sick. For many of the cultures Dr. Price studied, bearing a child was the greatest act of a woman’s life. In many instances, years were spent in preparation prior to conception. Certain cultures considered a woman to be a whore if she conceived less than 3 years between births. The woman’s role after birth was to solely devote her love and attention to her infant while preparing her body for subsequent births. Inadequate birthing preparation and premature conception was seen as a potential compromise to the health of the child.

The onslaught of the industrialization of food and the presence of immense amounts of toxic chemicals and heavy metals that women are exposed to today, makes healthy childbirth an incredible challenge and for many women an impossibility.

The incidence of autism has reached epidemic proportions. Undoubtedly autism is due to the fierce onslaught of vaccinations, coupled with the often toxic and dysbiotic biochemical terrain of the mother who is bearing or nursing the child.

The unbelievable amount of vaccinations a child is given in the first months of its life is a draconian reminder of the insanity of medicine and its myopic view of what constitutes health and immunity. The logic of injecting diseased animal tissue, attenuated viruses, neurotoxins, heavy metals and chemicals into the body of an under-developed, non-maturated child may be the greatest, most decisive crime allopathy routinely commits in the name of science and profit.

Most people still never question the efficacy and safety of vaccination. Nor have most people considered the immense economic incentives at stake for the continual use and promulgation of vaccination.

In truth, proper immunity comes with proper nourishment and adhering to the laws of nature, not from injecting poison into one’s body which over-stimulates and poisons the immune and nervous systems, glands, organs, cells and tissues.

Modern diseases such as cancer, diabetes and heart disease have reached epidemic proportions. These diseases did not exist to the non-industrialized people in Dr. Price’s era. In fact Price could not even communicate the diseases he was seeing in the modern world because there were no words in the native languages to explain diabetes, heart disease and cancer.

The big 3 killers are modern diseases and they are self-induced. Allopathy likes to blame disease on genetics. Its a great way to sell drugs: condemn the patient to an impending sense of fear and give them no alternative other then medication.

The incidence of Type 2 Diabetes is going to skyrocket over the next 30 years. Some estimates indicate that type 2 diabetes will double by the year 2034 while medical costs for this disease will triple. Type 2 diabetes is a disease that people have eaten themselves into. And they can eat themselves out of it if they choose.

Cancer will affect an estimated one out of three people. In many ways cancer is self-induced. Cancer is also strongly associated with environmental toxicity. The AMA and the various Cancer Societies have done a tremendous job of outcasting all physicians who treat cancer with non-conventional methods. These physicians become pariahs sacrificed on the holy alter of medicine.

Some of the most brilliant minds and health-oriented physicians were non-conventional cancer specialists. Emanuel Revici, MD perhaps the greatest physician over the past 3,000 years is considered by many of his colleagues to be the “Albert Einstein of Chemistry”. Revici successfully treated cancer, put AIDS patients into remission, cured heroin addiction in a matter of days, and successfully cured patients of mental illness through his methods of lipid-based treatments.

Due to the political nature of pharmacology and allopathy, many non-toxic alternative treatments of cancer are not given attention. This does not bode well to a world where cancer will continue to rise.

The origin of heart disease is not cholesterol despite the fact that allopathy still holds to that dangling theory. The lipid hypothesis has never been more than a hypothesis, and a very poor one at that. The reality is that cholesterol-lowering medications are the most financially profitable drug in the history of pharmacology. The effort to promote dogmatic propaganda is immense and has enormous economic incentives.

The incidence of heart disease and diabetes both correlate with excess consumption of starch, sugar, and refined and processed polyunsaturated oils. Grain-based agriculture and the seed oil industry exploded during the 20th century. After the low fat, high sugar diet crazes of the 1950’s through the 80’s, the incidence of heart disease catapulted.

I remember my diabetic grandmother, one time a healthy, rural European farm worker had loads of corn oil, bread, pasta, starches, and processed American agricultural bi-products lining her kitchen cabinets. She should have never adopted the garbage ways of eating espoused by an American culture intent on mass consumerism and government subsidized agriculture.

She would have never suffered from diabetes or heart disease had she maintained the whole food diet she had adopted at a young age. The filth of American industrialism and the fraud of the American dream stripped her of her health.

With the advent of mass agriculture and consumerism and the availability of every possible junk food imaginable, humans today have more choice. We can pick from the least expensive junk food with the greatest amount of food additives. Our children are wooed by the colorful labels of junk foods that line almost every grocery store in the U.S. Junk food companies market directly to children.

The children of today are expected to live shorter lives than their parents. This is a powerful indication that the industrialization of food coupled with the consumerism and corporatism will dictate the outcome to the fate of our health.

The nutritional wisdom passed down from generation to generation is all but dead. With the exception of a few isolated communities and pockets of conscious people, the prognosis for the health of human civilization is very bad.