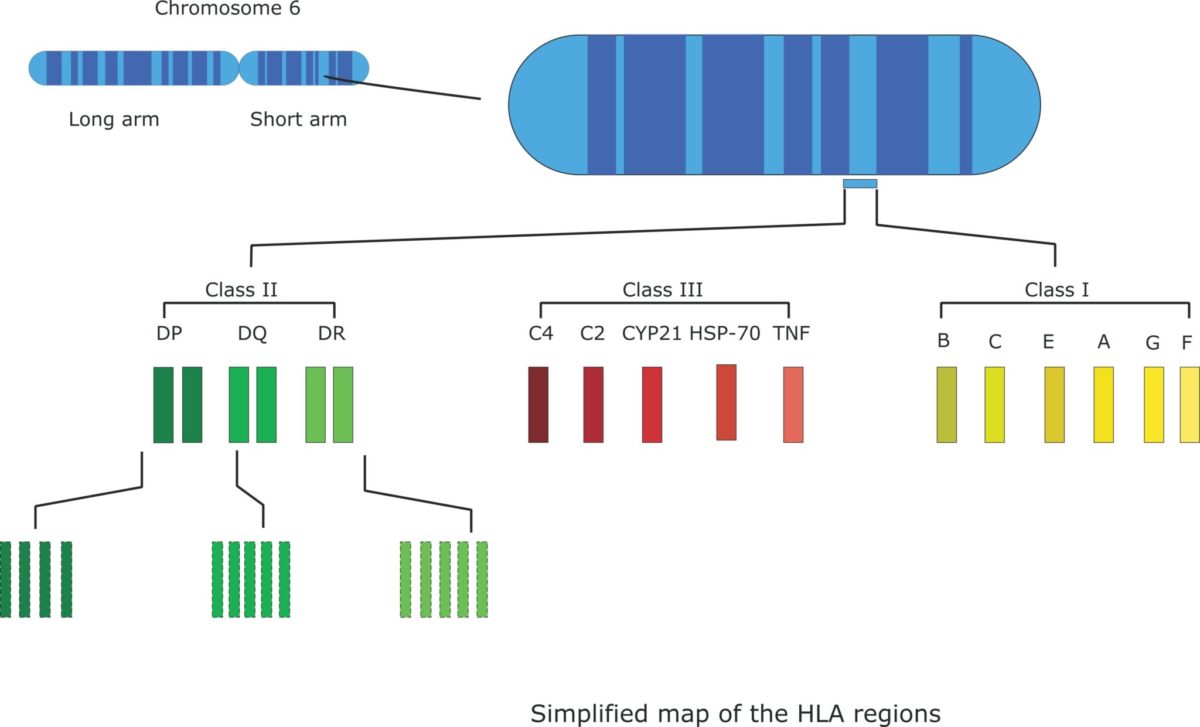 The RCCX gene cluster on chromosome 6 is one of the most complex regions of the human genome, and one that is likely a major player in chronic disease susceptibility. The RCCX gene region features a series of highly complex and anomalous activities, while the constituent genes in the region confer powerful effects throughout the physiology. This article is an attempt to define the RCCX phenotype from a clinical perspective, as a means to understanding which patients in the population likely suffer from complex illness, due to this highly unstable and complex genomic region. This article is largely theoretical because of the fact that RCCX genotyping has not been applied for widespread use. Credit is hereby given to Sharon Meglathery, MD for her pioneering clinical observations, which has led to the elucidation of the suspected RCCX phenotype from a clinical standpoint.

RCCX is a copy number variation (CNV) gene cluster comprised of 4 genes. Briefly these genes are:

CNV gene sequences such as RCCX comprise roughly 4-9% of the human genome yet are prone towards genomic instability, and increase the susceptibility to numerous diseases. In many respects, when discussing the RCCX gene cluster, many of the standard rules of genetics are challenged, as linearity simply does not apply. Even when discussing the copy number genotype itself (monomodular, bimodular, trimodular, quadrimodular), linearity does not apply, because there are far more anomalies that can occur aside from the copy number. New models of research are required in order to develop quantification of anomalous RCCX events within individual genotypes.

Genetic variability of the RCCX cluster is influenced by many factors. Some of these include:

One of the major problems with scientific research with respect to chronic disease is that it attempts to isolate and study single variables and link those to a complex disease. Chronic disease does not involve singular causes, linearity or singular variables, but rather a convergence of hundreds or thousands of variables simultaneously. Scientific papers that attempt to study multiple variables, and to affect those by using a combined therapeutic approach are often rejected for publication because they are labelled as too complex. Until more sophisticated models are employed, (which study the multi-variable nature of chronic disease), chronic disease research is prone to reductionism.

This central problem with scientific doctrine is a major challenge to RCCX research. While a considerable body of literature exists with respect to various components of the RCCX region, there has yet to be a publication that recognizes how this complex gene region is involved in chronic, complex, comorbid disease. An overwhelming amount of evidence implicates this genomic region as a central player, however new models of research are vital in order to prove the existence of an RCCX comorbid phenotype.

The fact that RCCX contains a remarkable parade of complex genomic events, the cluster can be likened to a house of cards or a set of dominos. The combined effect of these complex genomic interactions creates the impression that genomic instability is affecting a vastly under-reported percentage of people in the population. The best way to initially identify who in the population suffers from some adverse RCCX genotype is by:

The RCCX spectrum phenotype is best defined by group. Depending upon inter-individualistic RCCX genomic inheritance and interactions, the phenotype will not be linearly expressed in all individuals.

Identifying The Most Likely Candidates for RCCX Involvement in Comorbid Disease

Commercial or clinical genetic testing for RCCX is not currently available. In the instance where RCCX modular, CNV genotyping would be made available, it would not reveal the incredible complexities that occur within the region.

The following section is an attempt to identify the most probable candidates for advanced RCCX genotyping, based upon the logical associations between known RCCX genes, phenotypical characteristics and that of the published literature.

It is postulated here that various RCCX genotypes will experience a divergent and wide spectrum of symptoms and disease presentations, which tend to run through families. It is important to consider that disease susceptibility is not necessarily independently related to inherited RCCX genotype alone. Various epigenetic and environmental factors will converge leading to extremely complex interactions.

Joint hypermobility implies some degree of loss of regulation of the extracellular matrix (ECM). The ECM does far more than provides structure for cells, tissues and organs. The ECM is also integral in modulating the life cycle of the cell and in maintaining cell-to-cell communication. The ECM is critical for the regulation of a number of growth factors. RCCX phenotypes may have impaired growth factor regulation. This may be particularly true for TGFß-1 and VEGF, two growth factors that directly interact with TNXB domains (18).

The number of C4 copies defines the RCCX modular genotypes: monomodular, bimodular, trimodular, quadrimodular. Variations of C4 genotype and C4 protein levels will have a direct effect on:

Variations of the complement C4 gene, and the C4 protein are associated with several autoimmune diseases. These include:

The association between family history of autism and autoimmune disease is established. One significant link is the C4b gene. Two separate studies found similar relationships between C4b null alleles and autism: the Egyptian study identified a 37% frequency, and the Utah/Oregon study identified a 42% frequency (3,4). Among Egyptian autistic patients who showed null alleles of the C4b gene, 40% of patients had family members who were found to have autoimmune disease, compared to 10% of controls (3). Therefore, individuals who have family members with autism diagnosis should be considered candidates for RCCX genotyping, and clinically should be considered as possible RCCX phenotypes.

Excessive pruning in the brain is a hallmark feature of schizophrenia, which links to C4-related mechanisms. A significant 2016 study identified the strongest genetic associations of schizophrenia linked to the HLA region, arising in part from allelic variations of the C4 gene located within the RCCX region. These tend to produce greater expression of C4a in the brain (6).

TNXB (tenascin-X), an abundantly present glycoprotein in the ECM, and part of the RCCX region has been found to be associated with schizophrenia in a 2017 study (7). A 2004 study found TNXB alleles to be associated with schizophrenia, including rs1009382, yet the mechanism of involvement has not been elucidated (8). One probable link between TNXB and schizophrenia is likely related to the fact that TNXB regulates the activation and function of TGFß. TGFß mediates neuronal refinement and mechanisms of microglia-mediated synaptic pruning, through modulation of complement proteins C3 and C1q (19). In a TNXB mutation or “negative event”, TGFß activation would be impaired. This directly impairs the function of neuronal refinement and pruning via complements C1q and C3.

One future area worth exploring with respect to schizophrenia and TNXB is the neighboring CREB gene located near TNXB. CREB is a cAMP responsive transcription factor, that controls the transcription of numerous genes including: BDNF, tyrosine hydroxylase, biological clock genes and neuropeptides such as somatostatin and CRH (32). Deficient CREB is associated with Alzheimer’s disease. Significantly, the CREB gene contains the transcriptional regulation of the TNXB gene. A single study investigating the association between TNXB and schizophrenia demonstrated a weak relationship between CREBL1 and schizophrenia. While the initial findings were weak, the researchers noted that disruption of cAMP in the brain leads to neurodegeneration (8).

The CYP21a2 gene generates 21-hydroxylase, central to the formation of the adrenal stress hormone cortisol and the mineralcorticoid aldosterone. Moderate to severe deficiencies of CYP21a2 leads to insufficient cortisol and aldosterone production. Classically this is represented in the disease CAH, congenital adrenal hyperplasia. In most cases of CAH, the CYP21a2 bottleneck leads to a shunt of progesterone towards the androgen pathway (there have been reports of rare forms of CAH featuring elevated cortisol and HPA axis activities). Deficient CYP21a2 is most commonly associated with:

Insufficient 21-hydroxylase leads to a shunt of progesterone towards the formation of androstenedione, which can then convert into other androgenic hormones, including testosterone. In females, it is postulated here that RCCX phenotypes are prone towards PCOS, ovarian cysts, hirsutism and hyperandrogenemia. These individuals often express joint hypermobility and/or skin hyperelasticity, characteristic of the involvement with the neighboring TNXB gene. Blood pressure may tend to be low, due in part to electrolyte insufficiency, and salt wasting caused by low aldosterone levels.

It is postulated here that other CYP21a2 haplotypes (apart from those with CAH) will experience similar emotional processing disturbances. A characteristic trait of certain RCCX phenotypes is having a highly empathic nature. This may be due in part to unique phenotype presentations in the limbic organs such as the amygdala, as well as variability of function to the related vagus nerve.

The relationship between psychiatric disorders among patients with CAH (congenital adrenal hyperplasia) has been described for decades (12). What is dramatically understudied are the relationships between mild 21-hydroxylase deficiencies and psychiatric illnesses. Common “psychiatric” presentations among suspected RCCX phenotypes include:

The implications for the involvement of CYP21a2 in a wide spectrum of psychiatric and neurochemical-related illnesses is based on the following:

The fibrinogen-like domains of TNXB regulate the bioavailability of TGFß (18). Any possible adverse genetic activities which affect TNXB may impair TGFß bioavailability. This may include: Mutated TNXB, “dominant negative events” involving TNXB, mutations in or near the TNXB fibrinogen-like domain, chimeric TNXB/TNXA activities, mutations or deletions of CREB (which contain the transcriptional start points of TNXB), unfolded TNXB or other anomalous, undefined TNXB events. The implications of dysregulated TGFß due to TNXB has profound implications on:

The TNXB protein interacts with VEGF-B, as well as the VEGF-R1 receptor. (18). Unlike its counterpart VEGF-A, VEGF-B regulates the growth and survival of blood vessels during pathological states. VEGF-B is critical for the survival of newly formed blood vessels, as well as smooth muscle cells and vascular stem cells (42). How this plays out among RCCX phenotypes is not known. It is worth speculating that during inflammatory insults, such as autoimmune flares, lack of VEGF-B activation could lead to vascular complications and symptoms. This may involve hypoperfusion of blood supply to peripheral tissues, symptoms of neuropathy and burning, discoloration of fingers and toes, and symptoms of hypoxia or pseudohypoxia.

This section is to propose a list of tests for suspected RCCX genotypes in order to establish involvement between RCCX and associated dysregulation of physiology.

From a research perspective, studying the relationship between biomarkers may prove more useful than studying the individual markers by themselves. Because of the overlapping nature of RCCX genes, biomarker relationships may be useful to establish the differences of RCCX phenotype groups.