Could Acid Reflux, Diabetes, Ulcers, Digestive Distress Be Caused By This? 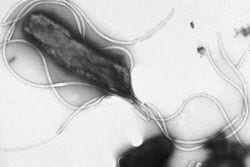 H. Pylori, also known as helicobacter pylori is a bacteria that can burrow in the pylorus portion of the stomach as well as the duodenum. It can remain sub- clinical (produce no symptoms) for years, even decades. H. Pylori can cause an entire host of symptoms, including:

An estimated 50% of people worldwide have H. Pylori. H. Pylori can also be a major culprit in gastric cancers, as well as gastric ulcers. There is a lot of recent medical research that has been done regarding the effects of H. Pylori. Marshall and Warren won the Nobel Prize in 2005 for their discovery of H. Pylori’s role in gastric cancers and ulcers. It has been implicated as the cause of more than 50% of peptic ulcers. H.Pylori can erode the mucosal lining of the stomach, as well as contribute to the shutting down of the parietal cells’ production of HCL.

H. Pylori is also strongly associated with insulin resistance, Metabolic Syndrome and cardiovascular disease. THIS study shows that after H. Pylori eradication, insulin, triglyceride and CRP levels diminished, whereas those who did not undergo H. Pylori eradication showed little improvement in these CVD risk factors.

Different species of H. Pylori have also been shown to burrow in the mouth, contributing to oral toxicity and peridontal disease.

The best way to determine if you have H. Pylori is through a stool antigen test. Breath tests are considered less effective. Contact me to learn more about how you can detect this pathogen.

The conventional treatment for H. Pylori eradication is completely idiotic in my opinion. It involves taking proton pump inhibitors (PPI’s) followed by various antibiotics. This is going to A) shut down your stomach’s production of the vitally important hydrochloric acid. B) Destroy your gut immunity and leave you susceptible for infections and fungal overgrowth. It has been identified that after undergoing H. Pylori eradication through conventional means, there is a contaminant rise in yeast. Yeast overgrowth is a result of dysbiotic conditions in the gut and is a cause of several additional problems.

There are many, very effective herbal formulations to eradicate H. Pylori such as powerful Amazonian herbs, African herbs, Mastic Gum and even Manuka Raw Honey.

The safe and effective elimination of H. Pylori should be accompanied with adjacent nutritional protocols which aim to improve gut ecology. Often with chronic health issues where H. Pylori is present, there is damage in the gut which needs to be repaired. Mucsoal barrier repair protocols may need to be initiated as well as individualized digestive therapies.