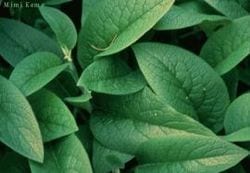 I first discovered this plant 15-20 years ago.  A teacher of mine spoke of how the establishment (the FDA) had given warnings against this plant.  Yet he said that in all his years, no one had ever had a bad outcome of use with the plant, even fed internally long-term.  Nor had his teacher, nor his, and on back for generations.  Thousands of people had used it, and it was a well-kept secret.  It speeds healing of any and all conditions, builds tissue, and this report says a lot, taken from The Energetics of Western Herbs p.463 (by Peter Holmes), “The historical use of this plant is interesting in that it demonstrates the superior skill of Native American healers in their use of plants…These tribes (that used the plant) effectively made redundant the primitive septic surgery and amputation performed by Western doctors (as seen in Dances with Wolves) thereby saving countless limbs and lives that would otherwise have been lost.”

I was obviously intrigued, yet did not use the plant much for another ten years, just observing it, watching it grow, and collecting more information about it.  I harvested one tiny piece of the root, big as one word on this page, and replanted it.  I saw it regenerate into an entire plant over 2-4 feet tall in a few months once put back into the soil.  I tried tasting it and noticed it was both sweet, slimy, bland, slightly astringent, and crunchy.  The leaves tasted more like wheat grass, with a slimy quality.

After a lifetime of struggling with various forms of what may be called Irritable Bowel Syndrome (IBS), hay fever, allergies, excessive colds and flus, I began to look into using this plant internally.  I had already seen its value on a friend’s knee injury.  I used it on my thumb, of which I cut off the end from the nail chopping lettuce years before.  The application of comfrey paste, seaweed, and honey regenerated the entire tissue back!

I knew I could not use the plant internally until whatever pathogenic microbes, whatever latent infections, and whatever abnormal growth in my body was under control.  In almost all Old-World healing traditions, there is a saying, “Do not feed the illness with a tonic.”  So, as I began using the plant more, taking it in the form of a fiber blend, or in tincture, I took breaks of 1-2 weeks for every 4-6 weeks using it, while doing gut cleansing, liver clearing, colonics, and regular massage.

Within a few months, maybe even weeks, I noticed I could tolerate foods that used to cause horrible diarrhea, common things like beets, coconut, grapefruits, lentils, coffee, and so much  more.  I also began noticing my bowels firming up more consistently than ever before in my life.  After six years of internal use, with breaks, I can say my weight, my guts, my life, everything about me is much better and healthier.  During the first few years of this process, my first chance at using it on a very sick client came.

This man had been diagnosed with Ulcerative Colitis.  It is severe degeneration of the gut lining, ulcers raw and irritated by most common fibrous foods.  He had blood in his bowel movements.  He was a wreck, given little hope in mainstream medicine.  This man was given comfrey for 6-8 months, on and off, with other supplements, foods, and herbs.  He began to feel so good, that he overate pizza and beer one night, two things I said were no-no’s, and ended up in the hospital, almost dying.  But we brought him food, got him home, and I can honestly say if he sticks with his program, can consider himself cured.

The plant has so many healing properties, I will only list a few here.  For those who want more information, see the sources at the end of this essay, or contact me through my website, www.healthalkemy.com.  Comfrey’s well known virtues are: heals ulcers internally and externally, stops bleeding both externally and internally, speeds bone and all tissue healing (sometime twice as fast as without it), specific for blood in the urine or lungs, helps dissolve and expel mucus, lowers fever, soothes dry and raw throat, relieves cough, and helps asthma any lung condition.  But what I use it mostly for is healing of the stomach, small and large intestinal lining.  If someone said I could only grow one herb, comfrey would be the one.

The downside of comfrey is that it is sticky, and needs other herbs to “push it along.”  I often combine cinnamon, ginger, ginkgo, or other chi moving herb.

I cannot state the value of this plant enough.  Safe and cautious use would be externally for any injury, open lesion, bleeding, or skin ulcer.  Internally, the tincture can be used in doses of ½ to 1tsp 2-3 times per day for 2 weeks, then a week off, then 2 weeks on and 1 week off cycle.  The fresh leaf tea can use ½ to 1 oz chopped fine with 2 cups water poured over it, steep 10 minutes then strain and squeeze.  The chopped root use 1/2 ounce simmered in 2 cups water for 20 minutes, then strain.  Add cinnamon, ginger, or even mint to it to move it along.

Note – this plant has been on the FDA’s list of “toxic” plants for many years.  Even though the studies were done on rats, and taken in amounts that would correspond to eating ungodly and unrealistic amounts for humans.  All things said here are based on my personal experience, those of my teachers, and a book written by an MD in 1936, soon forgotten in his era.

Since the FDA could prosecute anyone using this plant, all information herein is to be taken as “external use only.”   Keep the faith, truths are emerging in health, and plants like these will soon assume their place in the healing of many many people.