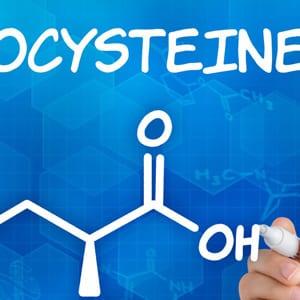 You may have heard about homocysteine before. For many years now, elevated homocysteine has been strongly implicated as an independent risk factor in the development of cardiovascular disease. Cardiovascular disease is one of the leading causes of death today, and researchers struggle to understand the many complicated causes behind this epidemic.

Many researchers are still under the assumption that elevated cholesterol is the major cause of cardiovascular disease. But there are countless problems with this hypothesis, and many researchers strongly dissent from this conventionally-accepted opinion.

The focus of this article is on homocysteine, its various functions and roles in the body. Literature going back more than a decade has linked a particularly virulent form of homocysteine, known as “homocysteine thiolactone” to the derangement of insulin signaling and glycogen release. This is significant in itself, because insulin-resistance can be a core component in the development of atherosclerosis, and type 2 diabetes.

Research also shows that antioxidants such as glutathione reverse the insulin-signaling damage induced by homocysteine.

The Inside Scoop On Homocysteine

If you follow the posts on this website, as well as the current developments in genetics and nutrigenomics, you may have heard about the methylation cycles of the body. In short, methylation (also referred to as ‘the one carbon cycle’) is a key biochemical pathway that influences and regulates a number of critical functions in your body. These include:

But here’s the catch: homocysteine needs to be re-methylated, and converted into other methylation cycle intermediates. If it doesn’t get properly re-methylated, it will build up in cells and tissues, where it causes derangement to insulin signaling and promotes an increase in oxidative stress and free radicals.

So there is a continual biochemical flow that needs to takes place.

How Does Homocysteine Get Re-Methylated? 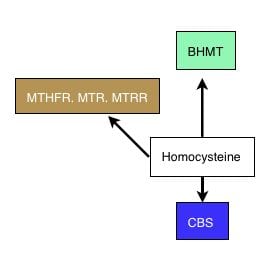 If you look at a picture of the methylation pathways, you can see that homocysteine can go in 3 different directions. We can refer to this as “the homocysteine fork in the road”. The fate of homocysteine is actually dependent upon a variety of important nutrients. These nutrients, and their biochemical variations (derivatives and substrates) are largely regulated by the status and functioning of certain genes.

The genes encode an enzyme, and the enzymes activate the methylation reactions. What if there are inherited genetic mutations affecting the methylation cycle? The answer is that the enzymes may not function properly, or have a weakened ability to function. Let’s take a closer look at some of these nutrients, as well as the genes and enzymes that affect them:

If any of these genes/enzymes don’t function properly, there can be a build-up of homocysteine. One of the most studied genes in these regards is MTHFR, which is key in its participation in both the folate and methionine methylation cycles. Individuals with MTHFR C677T gene mutations may have an increased risk of developing a number of health issues, including homocysteine-induced cardiovascular inflammation and deranged insulin signaling.

If I Have Certain Gene Mutations, Am I Guaranteed To Have Health Issues?

The answer is “no, not necessarily”. This is because most of our gene mutations are not being expressed all of the time. The influence of the “epigenome” plays a great role in the expression of our genes. Gene mutations lead to weak points, and certain susceptibilities, but this is not necessarily a guarantee there will be a problem that develops.

If My Homocysteine Is Elevated, What Do I Do?

If your homocysteine is elevated, it means that you are having some type of issues in your methylation cycles. Elevated homocysteine means you have an increase in oxidative stress. What is essential is getting educated on the methylation cycles, and then developing a strategy to support its functions, so that homocysteine can be re-methylated and moved along the cycle.

A study published in 2001 showed that elevated homocysteine thiolactone induced a rapid decrease to insulin signaling in cells. This same study found that the administration of the antioxidant glutathione (a powerful antioxidant) completely abolished the deranged insulin signaling, and “restored the insulin-stimulated glycogen synthesis”.

This is important news, because it demonstrates that powerful antioxidants play a vital role in preventing insulin resistance, which is a main cause of both cardiovascular disease and type 2 diabetes.

Direct-to-consumer genetic testing can be done for around $100. This type of testing can provide a much needed understanding into the individual, inherited genetic weaknesses that are contributing factors for cardiovascular disease and insulin resistance.

There are existing nutritional strategies that aim to support these weak points, by providing the nutrients needed to get the job done. In the instance of elevated homocysteine and the associated insulin resistance and oxidative stress, this is incredible information.

What is essential to understand is that no two people are identical in their nutrient requirements. Individualized nutrition offers the greatest chance for success.