Brief History of Radioactivity in the U.S. 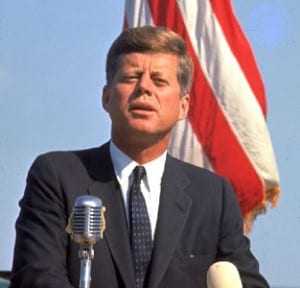 The Fukushima radiation panic has caused tens of thousands of Americans to buy out the nation’s supply of potassium iodide in fear of radioactive exposure. Supplies all over the country are on back order at virtually all supplement outlets nationwide. Americans along the west coast have been racing to get other radioactive-protective products like chlorella, bentonite clay, and vitamins C and E.

The recent events have brought to mind the history of U.S.and Soviet nuclear detonation which took part during the mid 1940’s through 1963.

The U.S. military at one point in history detonated nuclear weapons with incredible regularity, as did the Soviets. The Cold War of the 1950’s was a race to see which country could build and detonate larger nuclear weapons.

In 1963, President John F. Kennedy signed the Nuclear Test Ban Treaty on July 26, just 4 months before he was assassinated:

Throughout the 1950’s the amount of radiation that was released into the atmosphere as a result of nucelar testing has trumped the amount of radiation that is or will be relased at the Fukushima plant in Japan. There is no question that a meltdown or leaking of radioactive isotopes is extremely hazardous and precaution should be taken. It interests me however that the mass rush for potassium iodide and other products never took place at other points in history, such as in the 1950’s when thousands of megatons of nuclear weapons were being detonated all over the pacific, Russia and the U.S.

Consider that during the 1950’s at the height of nuclear weapons testing, so much radioactive fallout was being released that entire weather patterns were being altered. The United States was conducting many of these nuclear tests at the Nevada test site within their own country. The Soviet Union detonated the largest nuclear weapon ever produced, Czar Bomba in 1961, a 50 mega ton weapon so large that it was impractical to use for combat purposes.

Radioactive fallout from all of this nuclear weapons testing resulted in contamination with the food supply. At the end part of the 1950’s much of the milk and dairy bought in the United States was contaminated with Radioactive Isotope Strontium-90.

In Soviet Russia, the communist government converted its radioactive contaminated milk into cheese and shipped it to millions of Russians and Ukrainians.

Even though the amount of radiation being leaked from Fukushima should not be minimized, its important to also consider that previous generations have been exposed to massively higher amounts of radioactive fallout than we are now. Still, potential radioactive contamination should not be taken lightly.

Fortunately because of the growing intensity of the availability of knowledge due to the internet, there is an incredibly high amount of precaution that people are taking. Also the amount and types of nutritional supplements available today dwarf what was available to the mainstream in the 1950’s. I think that this bodes well for anyone living in an area where they feel threatened by potential radioactive fallout.

Have we seen the end of nuclear waste, nuclear fallout and nuclear testing? Unlikely. As Major Kong was riding down the hydrogen bomb over Russia in the classic film, Dr. Strangelove, remember the ending song of the film: “We’ll meet again, don’t know when…”