An Alkaline GI Tract May Lead To Candidiasis & Dysbiosis 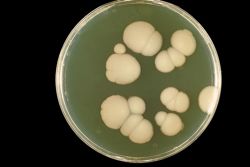 If the stomach and large intestine exist in a pH that is not optimal, or in a pH that is not sufficiently acid, there can be numerous consequences such as chronic infections, candida albicans overgrowth, high amounts of putrefactive bacteria, “leaky gut” and dysbiosis.

In order for proper digestion to occur, the stomach must be acid. Hydrochloric acid in the stomach triggers the protein-digesting enzyme pepsin, which breaks protein down into smaller peptide chains. An increasingly common condition called hypochlorhydria reflects an insufficient amount of acid in the stomach.

Insufficient stomach acid can result in inadequate digestion and assimilation of protein and of minerals. A number of minerals and trace minerals are dependent upon HCL in order to be assimilated such as calcium, magnesium, iron and zinc. The result of a lack of stomach acid may produce symptoms of acid reflux, bloating, flatulence, not to mention the onset of pathogenic infections, putrefactive waste from improperly digested food, as well as the dysfunction of other digestive processes.

The large intestine is an enormous surface area. One of its main functions is to absorb vitamins that are produced by colonic bacteria. The large intestine’s bacterial flora also enables the utilization of indigestible carbohydrates. If the intestinal terrain becomes excessively alkaline, dysbiosis may ensue.

It is well documented that antibiotic use is strongly implicated in the development of yeast infections such as candidiasis. Taking the supplemental probiotic strainsacchromyces boulardi may inhibit the onset of systemic yeast infections in some individuals.

When candidiasis is present, it may become quite invasive if the terrain in the gut supports it. Candida may produce mycotoxins, fungal metabolites which contribute to the promulgation of dysbiosis.

Immunoglobulins are protein antibodies that destroy foreign invaders. IgA is the most abundant immunoglobulin in the intestines. When dysbiosis is present, IgA will tend to be either very high or very low. If IgA levels in the gut are very high, it indicates a strong response to pathogenic activity. If IgA is low, it tends to indicate the gut immunity is shut down and in a dire state.

Certain fermented foods such as sauerkraut, yogurt and kimchee all are rich sources of lactic acid, and lactic acid bacteria.

SCFA’s (short chain fatty acids) are produced in the intestines from the anaerobic fermentation of dietary fiber. Numerous SCFA’s such as Butyrate demonstrate a strong ability to modulate gut immune activity. Additonally, SCFA’s such as butyrate exist in certain foods such as butter and Parmesan cheese.

Research has uncovered that certain SCFA’s such as butyrate can powerfully modulate gut mucosal immunity. Inflammatory bowel diseases such as Crohn’s and ulcerative colitis tend to respond very favorably to butyrate administration. Studies have shown that butyrate modulates pro-inflammatory cytokines such as interleukin-6 and TNF-a (tumor necrosis factor alpha).

Restoring Health To The Gut

Restoring gut ecology is pivotal for the improvement of health on all levels. Considering that approximately 80% of the body’s immune defenses is in the gut, restoration to healthy gut flora and GI integrity cannot be over-emphasized.

All factors that contribute to or cause intestinal dysbiosis should be identified and removed.

Nutritional strategies that improve function, gut ecology and are tailored to the needs of the individual, have the greatest potential to heal.