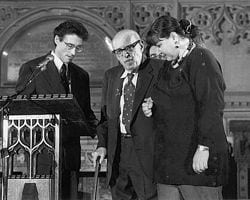 Emanuel Revici, MD was a Romanian-born physician who had traversed the spectrum of human health, chemistry, lipids and physiology in ways never previously seen. Having emerged during the boom of quantum physics during the early and mid-20th century, Dr. Revici’s 77 years of clinical practice was inspired by Albert Einstein and quantum theory.  Einstein is